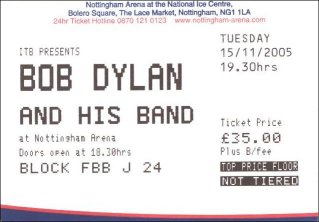 A legend in concert - but what about his wasted voice?

A week before this concert I received an email from the local Evening Post, in search of the long defunct Nottingham Dylan fan group for some preview comments on Bob's first ever performance here. I replied as follows:

Personally I have mixed feelings about the concert. I have seen Dylan in concert on numerous occasions, though far short of the number some more dedicated fans have clocked up. The first was in 1981 at Earls Court, when Dylan was in stunning form. I went to several other concerts in the eighties, but didn't catch up with what is now called the "never ending tour" until 1995, when I saw Dylan two nights running in Brixton, supported by Elvis Costello. The intensity of those concerts is unforgettable.

Dylan has achieved everything that it is possible to achieve in pop music - hits, money, awards, acclaim - yet he still tours incessantly. Why is that? I presume it is because he is driven to do it and cannot help himself. He is driven to perform; to him it is a religion, a calling, a vocation. Some people attend many different concerts on the same tour, because every one is different; not only different songs, but new approaches to the same songs.

The classic complaint is that Dylan can't sing. For sure his voice is unlike any other singer, but it is not only rasping and nasal. It is agile and expressive, with a seemingly casual mastery of words and an ability to do extraordinary things with them, analogous to Jimi Hendrix's mastery of the electric guitar.

Unfortunately the never-ending tour has now laid waste to Dylan's voice. At his best, he can turn in a sublime performance; at his worst, it is painful to hear him tryng to wrench the words out; sometimes he loses it and manages little more than a croak. The frustrating thing is that he seems unable to do what is needed, to rest his voice and perform less frequently. I'm naturally anxious to see how his voice will be next week.

It is still worth going. It is something to be in the presence of genius, even on a bad night.

So how was it on the night? I took the bus to Nottingham's Broadmarsh station and walked nervously through a bleak and deserted underpass then up the steps with relief onto High Pavement. The Cock and Hoop was advertising gourmet pub food so I looked in. They had stopped serving and I made do with crisps and a fine glass of local Rock ale. Most people there seemed to be on the way to the concert, apparently including former cricketer Bob Willis. Not all were hardened Dylan fans. One I spoke to had never seen him in concert before, the other last saw him at Blackbushe in 1978. We discussed other ghosts from the past, now turning up to perform in Nottingham: The Damned have just been to Rock City, while Alice Cooper is on his way. Is Dylan any different, or just another nostalgia act?

I was tipped off that Dylan would be on stage soon after 7.30pm, so I went on my way. I enjoy the streets just before a big concert, humming with groups of two and three and four all drawn magnetically towards the venue. Most were in their forties or fifties. Found my seat just in front of the sound board. Lights dimmed, and there was Dylan with a five piece band and a black hat crashing into a raucous Maggie's Farm. I decided to scrawl a few notes as the concert progressed.

Voice is strong but the sound is not too good, there seems to be some distortion on the vocals. The band sounds fine though. This is a great energetic number, but looking around, I'm not convinced this audience knows how to rock. Rating: 6.

The Times they are a'changin'

A melodic performance with Dylan on keyboard. The words seem laden with irony. "Your sons and your daughters are beyond your command", sings Bob, but here he is surrounded by fathers and grandfathers, who is he singing to now? Harmonica section - this sounds great. Rating: 6

Bob's cracked and worn-out voice sounds best on blues numbers like this one, however there is little chance of making out the words. This song from Love and Theft is not what the crowd want to hear, but fair enough after two oldies. Rating: 5

Love minus zero - no limit

The Voice is not so good for this more tender song. It is gruff, almost staccato as Dylan tries to find a way to get the words out. Some words disappear into gruffness; a bird with a broken wing. Harmonica section comes as a relief. Rating: 5

It's Alright Ma, I'm only Bleeding

This one works better, strong performance. No cheer any more when the president stands naked - I wonder when audiences stopped doing this? Worth a cheer actually, with Bush in so much trouble. "I've got nothing ma ... to live up to" sings Bob. Dead right and dead wrong. He has everything to live up in terms of his past, but on the other hand he has nothing left to prove. I like the way he sings on this, biting and powerful, but always gruff. Strange how every song seems to prompt reflections - it's hard to be here and not reflect on the passage of time. Rating: 8

Under the Red Sky

This is fantastic, just because I love the song and the the album of the same name, and I wasn't expecting it. It's a song for kids and I doubt whether the audience shares my enthusiasm. Again the words descend into gruffness. Do I really want to hear this? Do I wish he'd stopped touring, rather than tarnishing these precious jewels? Rating: 7

Lightweight song from Dylan's "recent" album Love and Theft. This is the first time I observe the appearance of the sing-song voice. What is the sing-song voice? This is where Dylan ends each vocal phrase on a rising pitch. Personally I regard it as a strategy to try and prevent each line from fading into gruffness. It's an annoyance once you notice it, and often a sign of filler material. Which this is. Bob looks like he's enjoying the music though. Rating: 5

At first I thought this was Ballad of a Thin Man, but no, it's Blind Willie, a sublime song which is dark and dramatic. Gruff voice suits it surprisingly well. Nice guitar solo, band is really into it, short Harmonica section. No sing-song voice. Rating: 9

This is taken at a fast lick; the vocals are OK but it's a bit frenetic. The tragedy though of Dylan in 2005 is that we're losing the way he plays with language, the artful and inventive phrasing that is a hallmark of his singing. Today, it's a matter of just getting those damn words out. Rating: 6

Dylan is struggling to sing this ballad and lapses into sing-song voice yet the song retains its power. I am reminded that today is just a few days after Remembrance Day, November 11th. In these days of war in Iraq and around the world, the song is as timely as ever. Or is Dylan singing about himself? "He tried his best to talk, but his mouth could barely move; his mother turned her face away." Rating: 8

This is where Dylan loses it, turning from the potency of an anti-war song to some sort of cabaret act. A starry backdrop appears between pink curtains, violin starts up, and Bob declares "I'm in love with my second cousin". It's incongruous after John Brown, a sequencing mistake; all the intensity is gone. Quite nicely sung though. Rating: 4 (sorry Bob)

The fourth song from the over-represented Love and Theft. Bluesy number and the voice is fine, but it's not a favourite of mine, nor of the crowd. Quality filler, but filler nonetheless. If I'd known, I'd have gone for a drink during Floater. Rating: 5

Why oh Why didn't Dylan follow John Brown with this? Great song but unlike John Brown he seems to be going through the motions here. Reprises first verse at the end so that we end on "I can see through your masks", how long has he been doing that for I wonder? Rating: 6

Yet another from Love and Theft and again a bizarre bit of sequencing. Filler again, with lots of instrumental noodling. Maybe he is resting his voice. I feel robbed: here we are with Dylan, a band, an audience, why then have we got Summer Days instead of Desolation Row or Just Like Tom Thumb Blues or Visions of Johanna or One Too Many Mornings or any of hundreds of far superior songs. Rating: 4

Dylan now takes his bow. We see his odd uniform in full view: dark suit with red stripes on the trousers and jacket. The applause for the encore is muted, by now the audience is going through the motions too. It all went wrong after John Brown. Can Bob rescue it in the encore?

This is a popular choice, though the crowd soon gives up trying to sing or even clap along. Sing-song voice and a bit strangled; Bob is not doing the song justice. I still miss Dylan 95, when he opened with Down in the Flood, always did All Along the Watchtower as number 3 (we called it evening prayer), and included several acoustic numbers. Even so, it's a privilege to hear this great great song - voted song of all time by some poll or other recently -sung by its composer. Rating: 5

All along the Watchtower

As if hearing my thoughts, Dylan follows his band introductions with this song, a personal favourite. The band is really into it with plenteous echoes of Hendrix. No sing-song voice ... well, a bit. Still a strong close. Rating: 8

The hollering after this one is stronger than it was for the first encore, probably reflecting the crowd's preference for Watchtower over Summer Days, and who can blame them? Dylan however does not return. Concert closes at around 9.30pm.

So this is Bob Dylan 2005. I chatted to a couple of departing fans. "I didn't expect much" muttered one gent. Another enjoyed it, but would have liked to hear more old songs. I observed that despite the hefty wedge of Love and Theft, most of the songs were old; you can hardly say that Dylan passed over his classics. "But they didn't sound the same" was the response. "It was the band that made it for me", remarked his female companion. True, the band was fine. However, nobody would have tipped up to see this band sans Dylan. Good but not that good.

I guess it was worth going along, if only for Blind Willie, John Brown, and of course Under the Red Sky. In truth though, my feelings are as mixed afterwards as they were before.