Set for release on 2 November 2018 is The Mental Train, a box set covering Mott the Hoople’s Island years, when the band was less successful commercially but arguably at its best musically. Fans say that the energy of the live performances in these years was never recaptured. 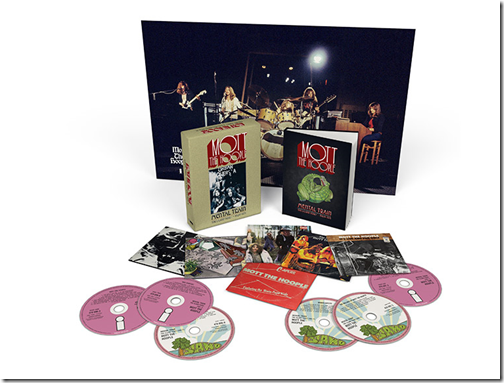 That makes this set very welcome. But what is in it? There are 6 CDs, with the first four being all the studio albums plus bonus tracks, CD5 rarities classified as “Ballads”, and CD6 live performances. The entire track listing is shown at the end of this post.

The CDs are all remastered “from the original tapes (where available)” (hmm) by Andy Pearce, and Kris Needs selected the bonus tracks and wrote new sleeve notes.

While 6 CDs seems a lot, the sad thing is that there is not much in the vaults that has not already been released, and this set reflects that. Just one CD of live material seems disappointing as well, considering how special this band was in concert.

A puzzle is that only 7 tracks are included from Live in Croydon, one of which is Keep a Knockin’ which is already on Wildlife. Then there are 5 tracks from BBC In Concert, 30 December 1971, which is all the live tracks from the Original Mixed Up Kids CD except The Moon Upstairs.

This will still be a good buy for those who do not have any of the albums. What about for fans who have most of it already? They will get a few unreleased tracks (I have not been through to work out how many there are) and the benefit of remastering, on which we will have to wait and see (or hear).

I will still recommend that you get hold of the entire Live at Fairfields Hall Croydon somehow, as well as Original Mixed Up Kids, and one of various CDs with Stockholm 16 Feb 1971 which is another great live album from this period.

If you have the Angel Air reissues of the studio albums, you will a lot more bonus tracks here, however Find Your Way (bonus track on the first album), It would be a pleasure (bonus on Mad Shadows), and It’ll be Me (bonus on Wildlife) do not feature here. You can also find these tracks on All the Young Dudes – The Anthology.

Most of the Two Miles from Heaven compilation does appear hear but inevitably not everything. Surfin’ UK is missing.

CD3: Wildlife (Originally released March 1971)
‘Whiskey Women’
‘Angel of Eighth Avenue’
‘Wrong Side of the River’
‘Waterlow’
‘Lay Down’
‘It Must Be Love’
‘The Original Mixed Up Kid’
‘Home Is Where I Want to Be’
‘Keep A-Knockin’ (Live)
Bonus Tracks:
‘Midnight Lady’ (Single A side)
‘The Debt’ (Single B side)
‘Downtown’ (Single A side)
‘Brain Haulage (Whiskey Woman)’
‘Growing Man Blues’ (Take 10)
‘Long Red’ (Demo)
‘The Ballad of Billy Joe’
‘Lay Down (Take 8)’

CD4: Brain Capers (Originally released December 1971)
‘Death May Be Your Santa Claus’
‘Your Own Backyard’
‘Darkness, Darkness’
‘The Journey’
‘Sweet Angeline’
‘Second Love’
‘The Moon Upstairs’
‘The Wheel of the Quivering Meat Conception’
Bonus Tracks:
‘Mental Train (The Moon Upstairs)’
‘How Long? (Death May Your Santa Claus)’
‘Darkness, Darkness’
‘Your Own Backyard (Complete Take)’
‘Where Do You All Come From (Backing Track)’
‘One of the Boys (Take 2)’
‘Movin’ On (2 Miles)’
‘Black Scorpio (Mommas Little Jewel)’