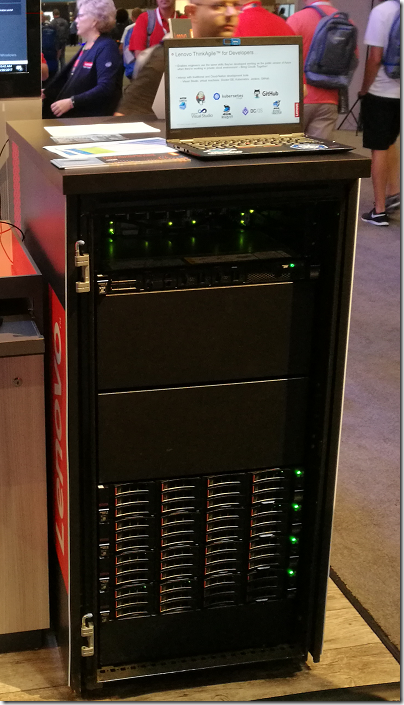 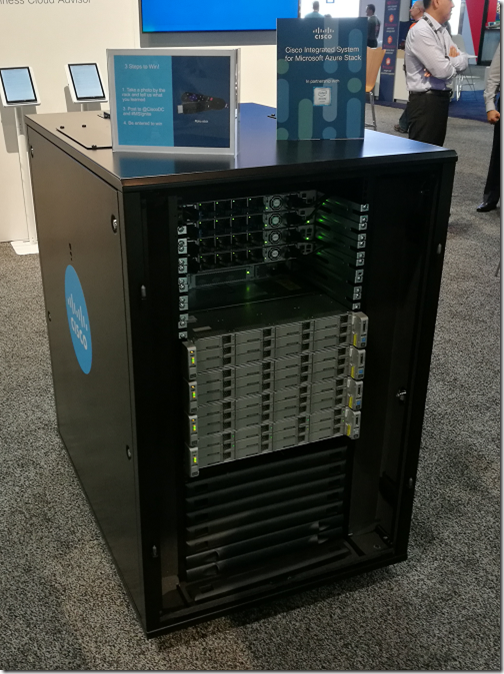 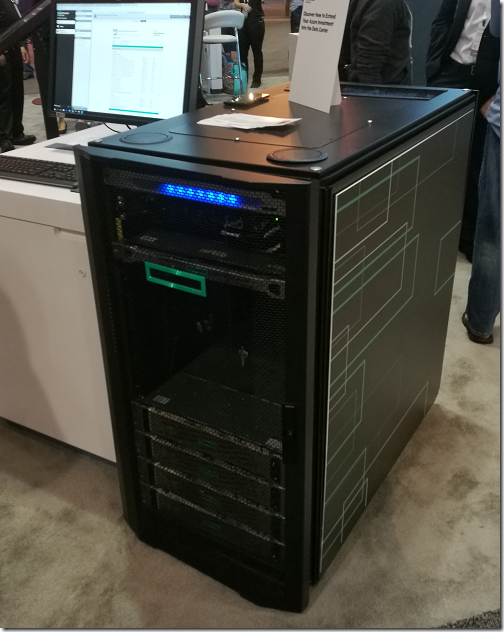 This was not one of Microsoft’s most surprising announcements, but even so, confirmation that some of the company’s most significant products are to receive updates a year or so from now. The announcement was made at the SharePoint and OneDrive session at the Ignite event here in Orlando. 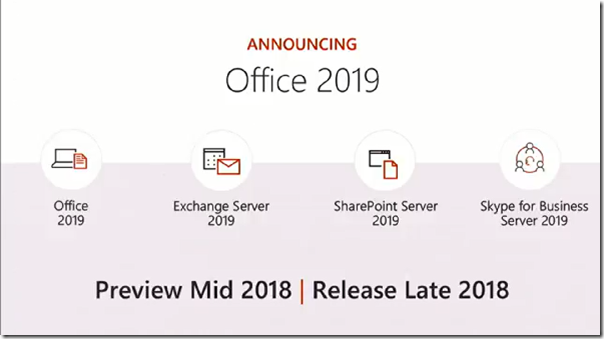 If you have an hour or so spare, you can view the session here:

Note that fewer people now use these products; that is, increasing numbers of users are on Exchange Online and Office 365. These are the same but not the same, and get updates earlier than the on-premises equivalents. Still, we may well see a makeover for Office 365 at around the time Office 2019 is released.

Either way, we should not expect a radical departure from the current Office. Rather, we can expect improvements in the area of collaboration and deeper integration with cloud services.

You will also need to think about the following dialog, if you have not already (the exact wording will vary according to the context): 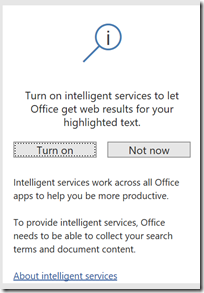 The deal is that you send your document content to Microsoft in order to get AI-driven features. 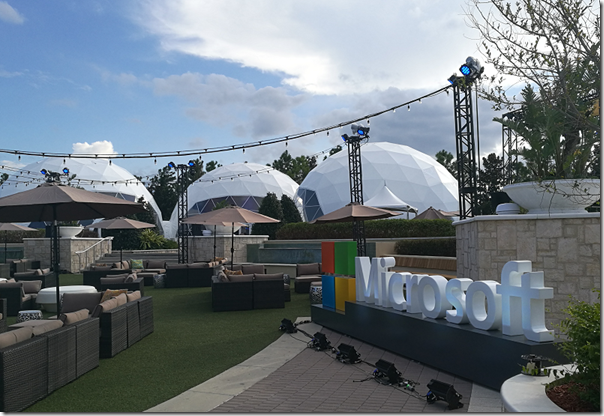 Microsoft has futuristic domes as part of its Envision event, running alongside Ignite here in Orlando. Ignite is the company’s main technical event of the year, focusing mainly on IT Pros but embracing pretty much the whole spectrum of Microsoft’s products and services (maybe not much Xbox!). With the decline of the PC and retreat from mobile, and a server guy at the helm, the company’s focus has shifted towards cloud and enterprise, making Ignite all the more important.

This year sees around 25-30,000 attendees according to a quick estimate from one of the PRs here; a little bigger than last year’s event in Atlanta.

Microsoft will present itself as an innovative company doing great things in the cloud but the truth is more complex, much though I respect the extent to which the business has been transformed. This is a company with a huge amount of legacy technology, designed for a previous era, and its challenge has been, and still is, how to make that a springboard for moving to a new way of working as opposed to a selling opportunity for cloud-born competitors, primarily Amazon Web Services (AWS) and Google, but also the likes of Salesforce and Dropbox.

If there is one product that has saved Microsoft, it is probably Exchange, always a solid email server and basic collaboration tool. Hosted Exchange is the heart of Office 365 (and BPOS before it), making it an easy sell to numerous businesses already equipped with Office and Outlook. Email servers are horrible things to manage, so hosted has great appeal, and it has driven huge uptake. A side-effect is that it has kept customers using Office and to some extent Windows. A further side-effect is that it has migrated businesses onto Azure Active Directory, the directory behind Exchange Online.

Alongside Office 365, the Azure cloud has matured into a credible competitor to AWS. There are still shortcomings (a few of which you can expect to be addressed by announcements here at Ignite), but it works, providing the company with the opportunity to upsell customers from users of cloud infrastructure to consumers of cloud services, such as Azure IoT, a suite of tools for gathering and analysing data.

The weakness of Microsoft’s cloud efforts has been the moving parts between hosted services and Windows PCs, and legacy pieces that do not work as you would expect.  OneDrive has been a persistent annoyance, with issues over reliable document sync and limitations over things like the number of documents in a folder and the total length of a path. And where are my Exchange Public Folders, or any shared folders, in Outlook for IoS and Android? And why does a PC installation of Office now and again collapse with activation or other issues, so that the only solution is removal and reinstall?

At Ignite we will not hear of such things. Instead, Microsoft will be presenting its vision of AI-informed business collaboration. Think “Facebook of business”, powered by the “Microsoft graph”, the sum of data held on each user and their files and activity, now combined with LinkedIn. The possibilities for better-informed business activity, and systems that know what you need before you ask, are enticing. Open questions are how well it will work, and old issues of privacy and surveillance.

Such things also can only work if businesses do in fact commit more of their data to Microsoft’s cloud. The business case for this is by no means as simple as the company would have us think.

The biggest announcement from VMWorld in Las Vegas and then Barcelona was VMware Cloud on AWS; essentially VMware hosts on AWS servers. 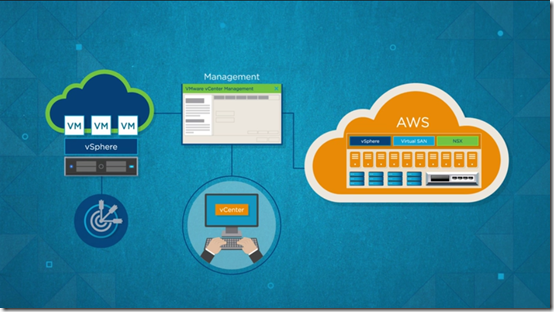 A key point is that this really is VMware on AWS infrastructure; the release states “Run VMware software stack directly on metal, without nested virtualization”.

Why would you use this? Because it is hybrid cloud, allowing you to plan or move workloads between on-premises and public cloud infrastructure easily, using the same familiar tools (vCenter, vSphere, PowerCLI) as you do now, presuming you use VMware.

You also get low-latency connections to other AWS services, of which there are far too many to mention.

This strikes me as significant for VMware customers; and let’s not forget that the company dominates virtualisation in business computing.

Price comparisons are always difficult. A big VM of a similar spec to one of these hosts will likely cost less. Maybe the best comparison is an EC2 Dedicated Host (where you buy a host on which you can run up VM instances without extra charge). An i3 dedicated host has 2 sockets and 36 cores, similar to a VMware host. It can run 16 xlarge VMs, each with 950GB SSD storage. Cost is from $2.323 to $5.491. Again, the lowest cost is for a 3 year subscription with payment upfront.

I may have this hasty calculation wrong; but there has to be a premium paid for VMware; but customers are used to that. The way the setup is designed (a 4-host cluster minimum) also makes it hard to be as flexible with with costs as you can be when running up individual VMs.

A few more observations. EC2 is the native citizen of AWS. By going for VMware on AWS instead of EC2 you are interposing a third party between you and AWS which intuitively seems to me a compromise. What you are getting though is smoother hybrid cloud which is no small thing.

What about Microsoft, previously the king of hybrid cloud? Microsoft’s hypervisor is Hyper-V and while there are a few features in VMware ESXi that Hyper-V lacks, they are not all that significant in my opinion. As a hypervisor, Hyper-V is solid. The pain points with Microsoft’s solution though are Cluster Shared Volumes, for high availability Hyper-V deployments, and System Center Virtual Machine Manager; VMware has better tools. There is a reason Azure uses Hyper-V but not SCVMM.

Hyper-V will always be cheaper than VMware (other than for small, free deployments) because it is a feature of Windows and not an add-on. Windows Server licenses are not cheap at all but that is another matter, and you have to suffer these anyway if you run Windows on VMware.

Thus far, Hyper-V has not been all that attractive to VMware shops, not only because of the cost of changing course, but also because of the shortcomings mentioned above.

Microsoft’s own game-changer here is Azure Stack, pre-packaged hardware which uses Azure rather than System Center technology, relieving admins of the burden of managing Cluster Shared Volumes and so forth. It is a great solution for hybrid since it really is the same (albeit with some missing features and some lag over implementing features that come to the public version) as Microsoft’s public cloud.

But there is more. Is cloud computing really about running up VMs and moving them about? Arguably, not. Containers are another approach with some obvious advantages. Serverless is a big deal, and abstracts away both VMs and containers. Further, as you shift the balance of applications away from code you write and more towards use of cloud services (database, ML, BI, queuing and so on), the importance of VMs and containers lessens.

Azure Stack has an advantage here, since it gives an on-premises implementation of some Azure services, though far short of what is in Microsoft’s cloud. And VMware, of course, is not just about VMs.

Overall it seems to me that while VMware Cloud on AWS is great for VMware customers migrating towards hybrid cloud, it is unlikely to be optimal, either for cost or features, especially when you take a long view.

It remains a smart move and one that I would expect to have a rapid and significant take-up.

I realise that Microsoft’s Entity Framework is the most common approach for data access in the .NET world, but I have also always had good results from a simple manual approach using DbConnection, DbCommand and DataReader objects, and like the fact that I can see and control exactly what SQL gets executed. If you prefer using Entity Framework or another abstraction that is fine and please stop reading now!

One snag with this more manual approach is that you have to write tedious code building SQL statements. I figured that someone must have written a utility application to generate this code but could not find one quickly so I did my own. It supports both C# and Visual Basic. The utility connects to a database and lets you generate a class for each table along with code for retrieving and saving these objects, ready for modification. Here you can see a generated class: 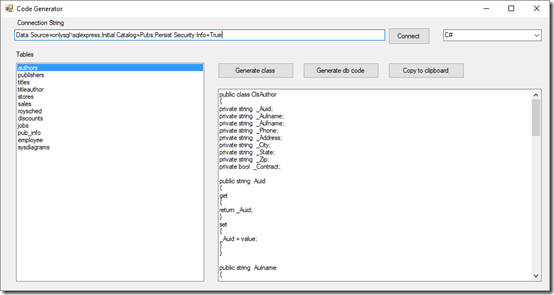 and here is an example of the generated data access code: 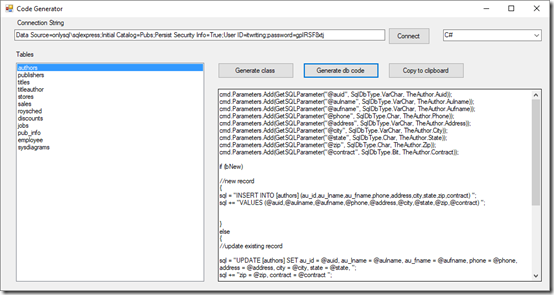 This is NOT complete code (otherwise I would be perilously close to writing my own ORM) but simply automates creating SQL parameters and SQL statements.

One of my thoughts was that this code should work well with .NET core. The SQLClient implements the required classes. Here is my code for retrieving an author object, mostly generated by my utility:

Everything worked perfectly and I soon had a table showing the authors, using ASP.NET MVC.

In order to verify that it really does work with .NET Core I moved the project to Visual Studio Mac and ran it there: 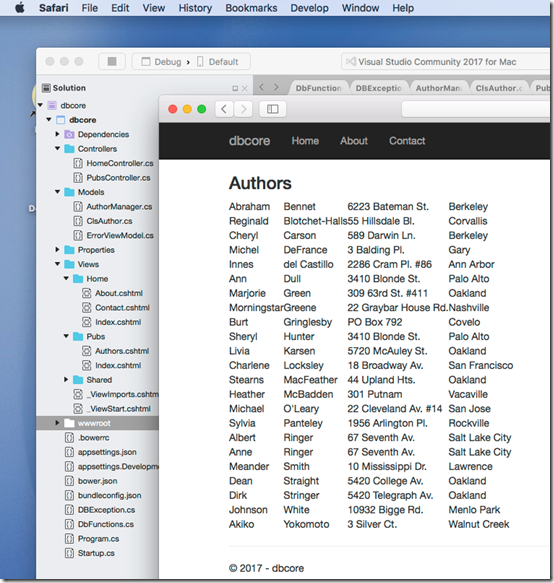 I may be unusual; but I am reassured that I have a relatively painless way to write a database application for .NET Core without using Entity Framework.