The trigger for me was Visual Studio 2015 – a large software installation – which I managed to break by installing some beta software. I couldn’t fix it easily, and knew I would have to uninstall it completely and then reinstall, which takes ages.

One thing that speeds up this kind of thing is to use an SSD instead of a hard drive. I already use SSD on my laptop, but my PC had two 1TB WD Black hard drives in a RAID configuration.

I ordered a 1TB Crucial MX200 SSD. While I could have managed with a smaller one, the larger size is worth it for me if only for the convenience of not having to spend time uninstalling stuff and reorganising my existing drive to free up enough space to downsize.

This 2.5″ SSD drive comes with a spacer and a code for downloading Acronis True Image. I did so, and used it to clone the existing drive. It took several hours but worked perfectly.

This PC is nearly four years old and based on an Intel Core i5. It has recently been upgraded to Windows 10. I am more than happy with the performance of the SSD. Here are the figures from CrystalDiskMark:

Here are the results from my old 1TB WD Black RAID:

There are not many upgrades that will get you such a dramatic performance improvement, and for me it made reinstalling Visual Studio 2015 substantially less painful.

I no longer have RAID on the C drive. The SSD according to Crucial [PDF] has an MTTF of 1.5 million hours (170 years or so) and “endurance” of 320TBW, equivalent to 175GB per day for five years. The implication is that after 320TB has been written, the drive will sill work but will be read-only. I don’t take much notice of such claims, but I can accept that today’s SSDs are more reliable than hard drives. If it fails though, I doubt that any data can be coaxed out of it, as you can often do with a hard drive. Even with RAID though you still need a backup strategy, so I will now be relying on that.

Hard drives are still useful for storing lots of stuff in a NAS (Network Attached Storage) but I can’t see myself using them again as the primary drive in a PC or laptop. 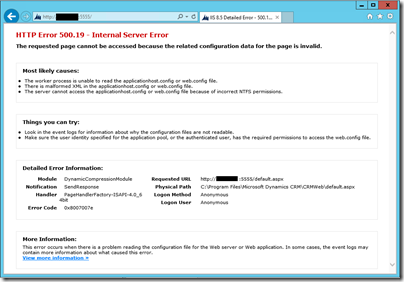 I have a Surface Pro, first version, still a reasonable spec with Core i5 and 4GB RAM, though the 128GB SSD is too small and a frustration.

Still, Microsoft hardware, Windows 8.1 installed and in good shape, Windows 10 upgrade will be a breeze?

Now, I know there is an ISO route that would probably work but I decided to wait for the upgrade to arrive via Windows Update since I have yet to see this run successfully. In due course the GWX (Get Windows 10) update sprang to life and said my upgrade was ready. 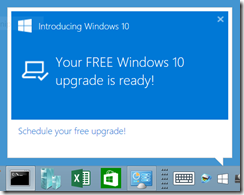 Note that in anticipation of the big day I had freed over 10GB of disk space which should be enough, right?

The upgrade failed though. 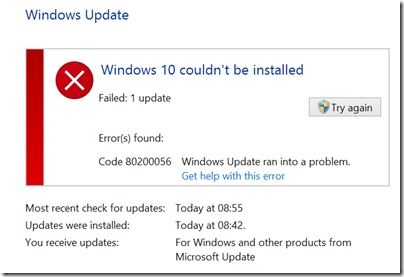 Well, I understand that things go wrong sometimes; but note that Microsoft has not seen fit to give us any log entries to give a clue about what might be going wrong, just an error code and a useless link that leads to generic Windows Update troubleshooting tips.

I did try a few things. Freeing more disk space. Resetting Windows Update. The famous sfc /scannow beloved of generic forum respondents. I was rewarded for my efforts with a variety of different error codes but the same outcome.

Now my Surface is mocking me. Every time I boot up, I get the little pop up assuring me that my upgrade is ready. Every time I shutdown I am am invited to “update and restart”, the machine attempts to install Windows 10, and then again it fails.

I guess I should get the message: this is not going to work.

Again, I know there is an ISO route and I guess I will have to use it; but while I am not really surprised, it is disappointing that even on first-party hardware the automatic upgrade is so problematic.

I am not sure what changed, but I tried the update again a couple of days ago and it worked. This is the first time I have successfully upgraded a PC to Windows 10 via Windows Update. 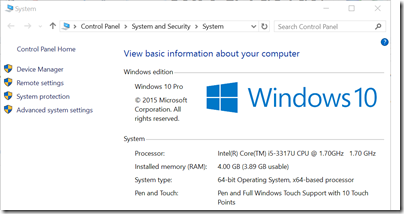