Microsoft has reported its latest financial results, for the quarter ending December 31st 2015.

Here are the latest figures (see end of post for what is in the segments):

A few points to note.

Revenue is down: Revenue overall was $million 23.8, $million 2.67 down on the same quarter in 2014. This is because cloud revenue has increased by less than personal computing has declined. The segments are rather opaque. We have to look at Microsoft’s comments on its results to get a better picture of how the company’s business is changing.

Windows: Revenue down 5% “due primarily to lower phone and Windows revenue and negative impact from foreign currency”.

Windows 10: Not much said about this specifically, except that search revenue grew 21% overall, and “nearly 30% of search revenue in the month of December was driven by Windows 10 devices.” That enforced Cortana/Bing search integration is beginning to pay off.

Surface: Revenue up 29%, but not enough to offset a 49% decline in phone revenue.

Server products: Revenue is up 5% after allowing for currency movements.

Xbox: Xbox Live revenue is growing (up 30% year on year) but hardware revenue declined, by how much is undisclosed. Microsoft attributes this to “lower volumes of Xbox 360” which is lame considering that the shiny Xbox One is also available.

This is a continuing story of cloud growth and consumer decline, with Microsoft’s traditional business market somewhere in between. The slow, or not so slow, death of Windows Phone is sad to see; Microsoft’s dismal handling of its Nokia acquisition is among its biggest mis-steps and hugely costly.

CEO Satya Nadella came from the server side of the business and seems to be shaping the company in that direction, if he had any choice.

Azure and Office 365 are its big success stories. Nadella said in the earnings call that “the enterprise cloud opportunity is massive, larger than any market we’ve ever participated in.”

A reminder of Microsoft’s segments:

More Personal Computing: What a daft name, more than what? Still, this includes Windows in all its non-server forms, Windows Phone both hardware and licenses, Surface hardware, gaming including Xbox, Xbox Live, and search advertising.

In January 1972 I started at a new school. I had enjoyed pop music on the radio but it was here that I gradually became aware of things called albums, records with other-worldly sleeves and amazing propulsive music. I wanted them.

It look a while to get a record player of my own so I started with cassettes – taping everything I could find.

In April 1972 a single was released, Starman by David Bowie. It was catchy, it was extraterrestial, it was about listening to the radio at night (just like I used to do), it was about letting the children boogie, I loved it.

Moving on to the Ziggy Stardust album, Bowie became special to me. Looking back I am sure it was because I felt a bit of a misfit and Bowie’s music and image was about acceptance and celebration of oddness, as well as exploring sexuality in ways that were appealing and mysterious to innocent young things like myself.

I kept the faith through Bowie’s ch-ch-changes, Ziggy Stardust’s retirement, the fractured world of Diamond Dogs, the strangely downbeat David Live, the funk of Young Americans, train noises and Earl Slick’s frantic guitar on Station to Station, sombre electronica on Low, and then the unforgettable “Heroes”, love in the shadow of the Berlin wall.

Bowie had his difficult middle period for sure, but was always interesting. He was an actor as much as a musician and one of the acts he performed was himself; with Bowie the difference blurs.

His work shows a deep interest in what it means to be human; he’s content that the madmen “are just as sane as me” (with all the ambiguity that implies), his writing on outer space is also about inner space because if you imagine yourself “out there” you have nothing but yourself for company.

Bowie had huge artistic courage. I much regret not seeing his 1995 “Outside” tour when apparently some audience members walked out because he focused on his dark new material and not greatest hits.

That said, I was fortunate to see Bowie in concert on several occasions, starting with Earls Court in 1978, and including Milton Keynes Bowl 1983 and (most memorably) Nottingham’s Rock City in August 1997. 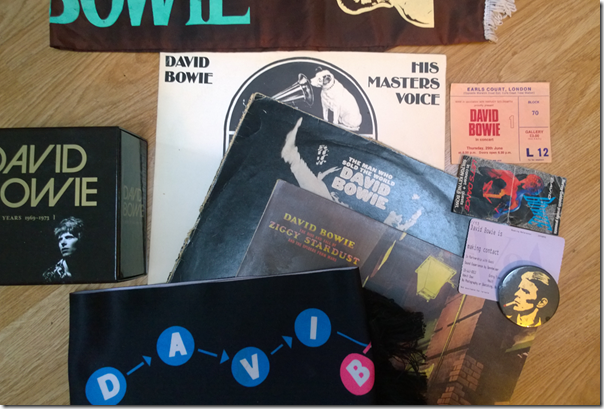 Some Bowie memorabilia from my attic

This last was the closest I got to the man, playing in a small 1,500 capacity club venue and standing fairly close to the stage. He performed a long set with many of my favourites, the darker side of Bowie, starting with Quicksand from Hunky Dory “I’m sinking in the quicksand of my thought” and including I’m Afraid of Americans, Fashion, Fame, Under Pressure, White Light White Heat, and much of Outside.

Late period Bowie is more of an acquired taste than his early years but rewarding. I found The Next Day in 2013 moving and when he sang “Where are we now” of course I was transported back to my schooldays and asking the same question of myself.

Bowie was reclusive in his later years, especially after being injured on tour in 2004, and lived quietly in New York.

Today’s news brought the news of his death, “after a courageous 18-month battle with cancer” according to his son Duncan.

This means that he composed his just-released album Blackstar in full knowledge of his illness and perhaps anticipating departure.

The song Lazarus, accompanied by a New York musical of the same name, seems particuarly to the point.

“Look up here, man, I’m in danger
I’ve got nothing left to lose
I’m so high, it makes my brain whirl
Dropped my cell phone down below
Ain’t that just like me?

This way or no way
You know I’ll be free
Just like that bluebird
Now, ain’t that just like me?”

Other lyrics on the album have new significance today, like these from Dollar Days:

Bowie made his ending an artistic moment and one that is not without hope – Lazarus rose again after all – but also, like all his best work, full of ambiguity.

Twitter is a strange thing. Founded in 2006, it was initially promoted as a way of communicating with friends about what you are doing right now. It did not appeal to me. Who wants to know all that trivia? Who wants to publish it? Lots of people now on Facebook, apparently. But I digress. I joined Twitter eventually and discovered its two key features, first brevity, and second the ability to choose who you follow and not see tweets from anyone else. It is ideal for broadcasting or consuming news and comment, and that is how I use it. I particularly value it because it is not Google, and provides a way of making things known that is independent of Google’s all-powerful search algorithms.

Now CEO Jack Dorsey has tweeted about the lifting the 140 character limit:

At its core Twitter is public messaging. A simple way to say something, to anyone, that everyone in the world can see instantly.

We didn’t start Twitter with a 140 character restriction. We added that early on to fit into a single SMS message (160 characters).

It’s become a beautiful constraint, and I love it! It inspires creativity and brevity. And a sense of speed. We will never lose that feeling.

We’ve spent a lot of time observing what people are doing on Twitter, and we see them taking screenshots of text and tweeting it.

What makes Twitter, Twitter is its fast, public, live conversational nature. We will always work to strengthen that. For every person around the world, in every language!

And by focusing on conversation and messaging, the majority Of tweets will always be short and sweet and conversational!

We’re not going to be shy about building more utility and power into Twitter for people. As long as it’s consistent with what people want to do, we’re going to explore it.

And as I said at #flight, if we decide to ship what we explore, we’re telling developers well in advance, so they can prepare accordingly.

(Also: I love tweetstorms! Those won’t go away.)

Of course he really tweeted the above as an image: 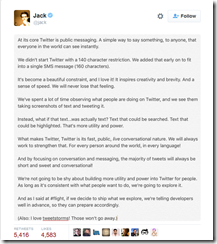 Will this wreck Twitter? What he has in mind, I suspect, is that tweets become expandable, so you can tweet as much as you like but by default only 140 characters, or a heading of your choice, appears in the feed. In fact this often happens already, except that the link is to an external site, rather than to Twitter.

Twitter’s problem has always been how to monetize the service. The original concept was almost useless for this, until Twitter added “promoted tweets”, which you see whether or not you want them. In 2011 Twitter added images, making it a richer platform for advertisers, and providing an easy way to bypass the character limit. Vine videos, other video acquisitions (SnappyTV in 2014, Perisccope in March 2015) mean that more video appears on Twitter. Brevity is still a feature of Twitter, but much undermined, and likely to diminish further.

The removal of the character limit will enable Twitter to host more content itself, rather than being a place where people post links to other sites. This will keep users on Twitter (or in its app) for longer, which means more opportunities to advertise.

At this point I am resigned to Twitter getting worse, as it has done for the last few years. Nevertheless, I will carry on using it until something else appears which is better. I see little sign of that, so Twitter still has me for the moment.

I also see that Twitter has to be viable in order to thrive. Making customers fee-paying does not work, so advertising has to be the solution.