It appears that Funbridge, an online bridge game, is discontinuing its app for Windows. 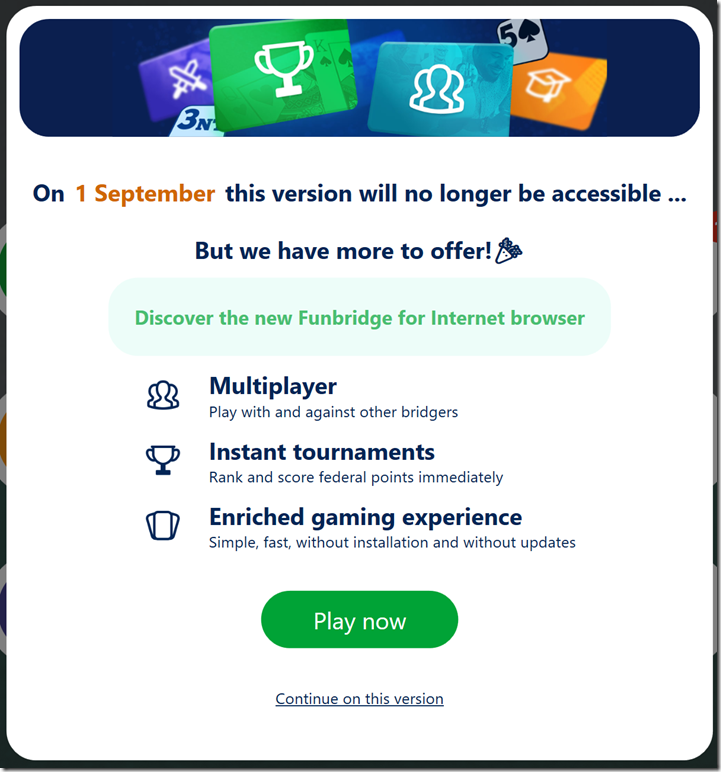 There is a bit of a sad story here. Funbridge used to have a Windows app that was a little messy but excellent. The company (GOTO Games) then came up with a mobile app for iOS and Android, which worked well on iOS and a bit less well on Android. This mobile app then migrated to Windows and Mac, in terms of look and feel; I  am not sure what programming framework it uses. The new-style Windows version has always been worse than the mobile versions for me, the UI is not really suitable for Windows, and I mainly play on iPad. Now it is going altogether, with users directed towards the web site.

I have always liked the Funbridge user interface on mobile and the asynchronous approach it users, so players can take as long as they like. Everyone plays against the computer and then compares their score with other humans playing the same cards. Funbridge is adding new real-time play though and will soon be adding audio and video online; this may relate to its retirement of the Windows application.

The abandonment of the Windows app is interesting in the context of Microsoft’s hope to boost Windows apps and the Microsoft Store in Windows 11. It looks as if GOTO Games will not be playing.