Rust is a programming language aimed at system programming – for which high performance and low-level system access is essential – but with safety features that make it harder to write dangerous or insecure code (though it is still possible). Since all programmers value both speed and stability, Rust is being used for tasks other than system programming as well. Rust is open source and sponsored by Mozilla, which uses Rust in its own development including parts of the Firefox web browser.

Rust is not one of the most-used programming languages; according to a StackOverflow survey only 3.2% of developers use it. Among professional developers that figure drops to 3.0%.

Yet Rust comfortably tops the list of most loved languages. 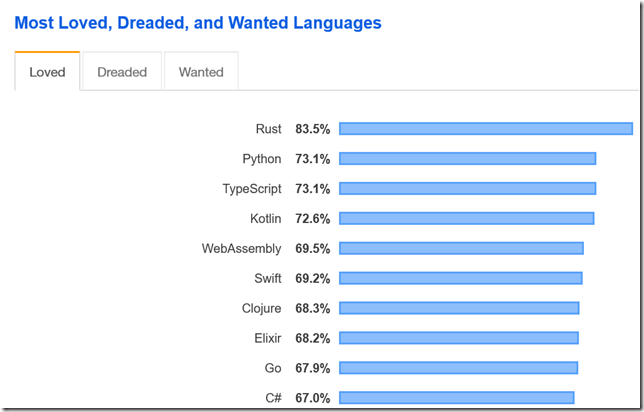 Second, Rust has built-in support for unit tests, in conjunction with Cargo, the Rust build system and package manager. Cargo will both generate test functions and run tests for you. You can do unit tests in any language, but this is a great way to prompt developers to use them.  Tests are a big deal. I recall Sqlite developer Dr D Richard Hipp telling me that testing was core to the project and without it, it could not progress as it does. Sqlite has 662 times more test code than the code in the Sqlite library itself.

Third, Rust can be compiled to WebAssembly so you can run it in a web browser.

Fourth, Microsoft is considering using Rust on the basis that it “could eliminate an entire class of vulnerabilities before they ever happened”.

Fifth, work is under way to build a new operating system with Rust, called Redox. I wrote about this briefly for the Register.

If asked to think of a language that is as efficient and powerful as C++ but nicer and for many of us more productive to use, I think of Delphi (or Object Pascal). Delphi has an ardent niche following but is unlikely to grow its usage much beyond it. Rust on the other hand is a modern language that benefits from things we have learned about programming in the last forty years (C++ was first thought by Bjarne Stroustrup when writing his PhD thesis, though the name dates from 1983), and with a refreshing lack of legacy. And Delphi is not open source, unless you mean Lazarus.

Worth a look if you have a moment – see here for how Verity Stop got on.