I am writing a Bridge game in C# – yes, I have been doing this for some time, it does run now but it is not ready for public unveiling.

It is good fun though and a learning experience, as I am writing it as a Windows 8 Store app. This means it can also be a Universal Windows Platform app but I have kept it compatible with Window 8.1 as I don’t want to lose that large market of Windows 8 users who have not upgraded to 10. Hmm.

Bridge is a card game in which a pack of 52 cards is dealt into 4 hands of 13 cards. Each hand is played as a sequence of 13 4-card “tricks”, and each trick is won one of two opposing pairs of players according to the cards played. Each pair of course tries to win as many tricks as possible, so one of the points of interests is how many tricks can be won if you play perfectly (ie with full knowledge of all four hands). Another point of interest is how each card played affects the potential number of tricks you can win with best play. For example, leading a King might cost you a trick (or more) if your opponents hold both the Ace and the Queen of that suit.

This is called “double dummy” analysis and smart people have written algorithms to calculate the answers. A double dummy analysis is useful in a bridge game for two reasons. One is that users may like to know, after playing a hand, what their best score could have been, or even to analyse the hand and see how if they played this card rather than that card at trick such-and-such the outcome would have varied. The other is that you can use it to assist the software in finding the best play. Of course it is important that the software plays fair by not using knowledge of all four hands beyond what would be known by human players; but it is legitimate to try out various possible hands that match what is currently known and use double dummy analysis on these hands.

One such smart person is Bo Haglund who wrote a C++ Windows library for double dummy analysis, called Double Dummy Solver (DDS) and released it as open source under the Apache 2 license. It works very well and is widely used in the Bridge software community, and has now been ported to Mac and Linux; you can find the latest code on Github.

Modifying a native code DLL to use with a Store app

I wanted to use the library in my own Bridge game but faced a compatibility problem. Windows Store apps can only call into DLLs that meet certain requirements, such as using only a subset of the Windows API, and DDS did not meet those requirements. My choice was either to port the DLL to C#, or to modify the code so that it would work as a Windows Runtime native DLL.

I have no doubt that the code could be ported to C# but it looks like rather a long job that would result in a library with slower performance (please feel free to prove me wrong). I thought it would be more realistic to modify the code, so I created a new Windows 8.1 DLL project in Visual Studio 2013 (I am now using Visual Studio 2015 but it is the same for this) and set about modifying the code so that it would compile.

In no particular order, here are some notes on what I learned.

I was able to get the DLL to compile after disabling the multi-threading support (more on this later), and commenting out some functions that I don’t yet need.

Another issue I hit was that Visual C++ by default performs “Security Development Lifecycle” checks (compile with /sdl). This means that that common functions like strcpy, strcat, sprintf and others will not compile. You have to use “secure” versions of those functions, strcpy_s, strcat_s, sprintf_s and so on. These are specific to Microsoft’s libraries though. Of course you can just not compile with /sdl, or define _CRT_SECURE_NO_WARNINGS, but I chose to fix all of these. Now the library compiled.

But did it work? No. I had introduced a stupid bug which took me a while to fix. Did it then work? Yes, but it took me some time to get it working from C#.

Next, I kept getting DLLNotFound exceptions. OK, so you have to add the DLL as content in your C# project, and make sure it is set to copy to your output. I still got DLLNotFound exceptions. It turns out that you get this exception even when the DLL is present, if there is a dependency in the DLL which is not found. What dependency was not found? I downloaded the Sysinternals Process Monitor utility and set the filter to monitor my C# game. I excluded SUCCESS results. Then I tried to load the DLL. This told me that it was looking for the file msvcr120_app.dll (the Windows Runtime version of the Visual C++ runtime library). My first thought was to add runtime libraries from the appx deployment packages, in: 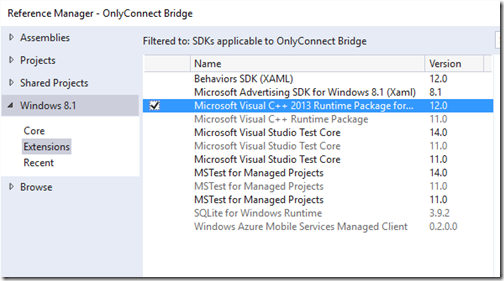 Then I discovered that all you need to do is to add a reference to the Visual C++ runtime packages, much easier. That fixed DLLNotFound.

Next, I had some problems calling the 64-bit DLL with Platform Invoke (PInvoke) from C#. I found it easier to compile both my C# app and the DLL itself as 32-bit code. I may go back to the 64-bit option later.

Now I had everything working; except that my DDS port was far inferior to the standard one because it was single-threaded. The original used QueueUserWorkItem which is not available in a Windows Runtime DLL. I searched for what to do, and came across this MSDN article which recommends using RunAsync, WorkItemHandler and IAsyncAction. However my DLL was not currently compiled using /ZW for “Consume Windows Runtime Extension”. I could add that of course; but then my DLL would have a dependency on the Windows Runtime and if I wanted to use the code for, say, Windows 7, it would not work. or not without yet more #ifdef blocks. No big deal perhaps; but my preference was to avoid this dependency.

There may be other solutions, but the one that I found was to use the Concurrency Runtime. Previously, QueueUserWorkItem was called in a for loop. I simply modified this to use a parallel_for loop instead, using the example here for guidance. I also added:

to the top of the code. It works well, speeding performance by about three times on my quad-core desktop. Of course I was greatly helped by the fact that the code was already written with concurrency in mind. 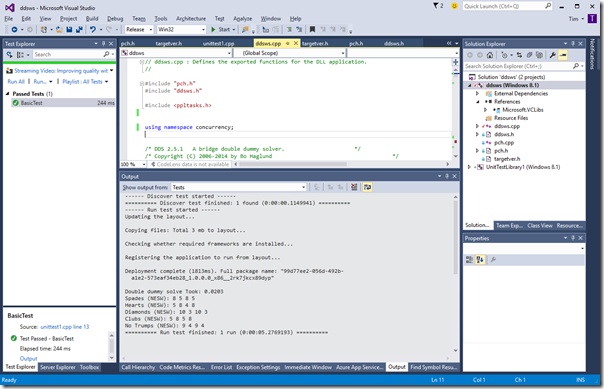 The effect is spoiled by the time it takes to load the DLL but fortunately you can get DDS to solve multiple boards in one call though I have yet to experiment with this.