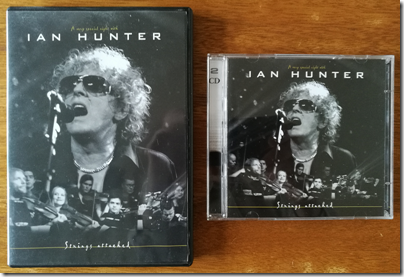 Ian Hunter is not the first rock musician to mix things up a little with some orchestration, but nevertheless the Strings Attached project came as a surprise at the time. It was very much a Norwegian event; Hunter says that Björn Nessjö, producer on Artful Dodger, “put this whole thing together.” 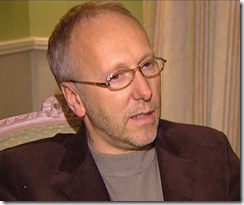 Something I wonder about is where the money came from, since orchestral albums are generally expensive to product, and Hunter had noted what a small budget there was for his previous album, Rant.
Strings Attached was on a major label (Mercury/Universal) and came out in both CD and DVD formats so presumably there was hope that sales would be decent (I am not sure if they were).
Anyway, Hunter performed a series of concerts at the Spectrum Scene Oslo in early 2002, of which the Jan 29th and 30th events used for the official releases. The band was as follows:

The setlist is focused on Hunter’s quieter songs, but not exclusively so. The performance has an unplugged feel. What is it like playing with an orchestra, Hunter is asked during an interview included on the DVD. ““You’re a little apprehensive because it’s totally different. They’re reading changes, I can’t just come in when I feel like it. The whole thing will go wrong,” he replies, explaining why the show has to be disciplined.

Most of the tracks are familiar, but there is a new song, Rollerball, which is one of the best things here, a great mid-tempo track about the decline of everything, a tad depressing though.

Hunter was apparently asked to include a cover or two, so included A Nightingale Sang in Berkeley Square (Eric Maschwitz and Manning Sherwin, also covered by Frank Sinatra, Nat King Cole etc). It’s well done, the closest Hunter has come to crooning.

The strings are not always prominent. In fact, during some songs (Twisted Steel, for example), they hardly play. On 23A Swan Hill, the strings only come in at the end. On Memphis, TrondheimSolistene do a great job with a loony violin backing. 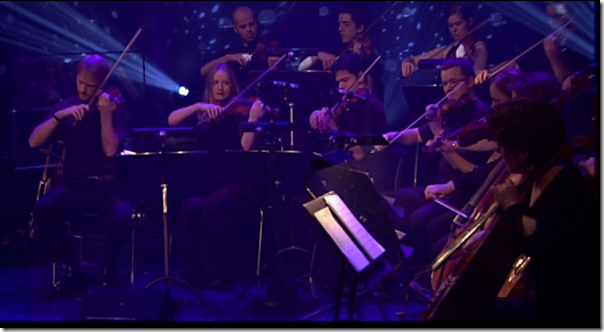 How I feel about this album is very much a matter of mood. Sometimes it seems quite magical, other times rather a snoozefest. I’d actually like the strings to be more prominent and the vocals a bit quieter; Hunter’s Dylanesque tones are rather at odds with the smoothness of the soloists. 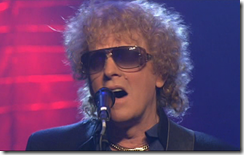 The opening song, Rest in Peace, is nicely done. Rollerballl is excellent as noted above. Michael Picasso, Hunter’s tribute to Mick Ronson, is ideally suited to this kind of backing. Waterlow, from Mott days, is a superb performance, so is Irene Wilde Dudes is graceful, but the closing number Saturday Gigs is not too good.

Really it is pretty good overall, especially if you like Hunter’s ballads more than his rockers.

Of course there are a few tracks only on the CD set so you have to buy both if you want everything. The DVD includes an interview with some insightful remarks from Hunter about his work. "The first line of a song is the most important. If you can get a first line, it just goes from there," he says.

Asked if Mott will ever play together again, he says no, "it would be horrible". 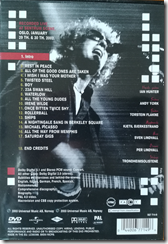