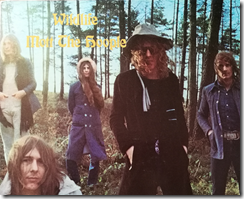 Let’s set the scene for Mott the Hoople towards the end of 1970. The band’s gigs were going down a storm, but record sales not so much. Relations with producer Guy Stevens were also strained, to say the least. Stevens apparently tried to remove organist Verden Allen from the band, after Allen broke a copy of Mad Shadows in disgust at the mixing out of his work on Thunderbuck Ram. The rest of the band took Allen’s side and decided they needed a new producer.

In the meantime, Mott recorded a gig at the Fairfield Halls Croydon in September 1970, which was meant to be a live album. The gig was somewhat chaotic. “I remember Jim Capaldi getting smashed over the head with a maraca,” recalls Allen. The recording was affected, with wires going adrift and some tracks interrupted, and Stevens decided it was not usable.

It’s a shame, because if Mott had released Live at Croydon it might have done very well, on the back of the band’s live popularity, since it captures the energy of the performances. The tapes were not that bad, and the album was released in 2007 by Angel Air; it is an essential listen if you have any interest in this period for the band. “This group is about to wreck your mind”, says the announcer, before the band goes into a blistering version of Neil Young’s Ohio.

Mick Ralphs had a strong influence on the sound, and in contrast to the live shows, the band decided to go for a lighter, more melodic sound, influenced by country as well as rock. 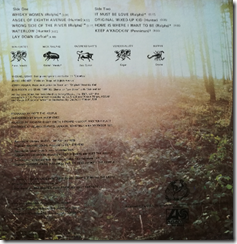 Whisky Woman continues the tradition of opening with a Mick Ralphs number, but is not as strong as Thunderbuck Ram on the previous release. The title comes from the Whiskey-a-Go-Go club in Los Angeles, according to the band’s biographer Campbell Devine. Spelt “Whisky” on the original album sleeve but possibly Whiskey Woman is correct.

Angel of Eighth Avenue is an Ian Hunter ballad about a girl he met in New York.

Wrong Side of the River comes from Mick Ralphs and sounds almost like a CSNY number, with his high-pitched voice taking off Neil Young in an echo of Hunter’s borrowing from Bob Dylan. Good song though.

Waterlow is the second Hunter ballad and more powerful than the first, probably about his divorce from his first wife Diane. Waterlow Park is a place in North London where he used to take his children. “Blue broken tears hide away the years – misty highway seems colder today.”

Lay Down is a cover of a song by Melanie (Safka) from her 1970 album Candles in the Rain. The song is about her experience performing at Woodstock “we all sang the songs of peace”. Not the Strawbs song; yet is it not so far from the Strawbs in feel. Mott doing folk rock, but none the worse for it.

It must be love written and sung by Ralphs is the most obviously country-inspired song, kicking off with twangy guitar. It’s done nicely but you can’t help feeling that is the wrong direction for the band. The “love love love” chorus sounds almost like the Beatles.

Hunter’s third ballad is Original Mixed-Up Kid, and it’s another good one. It’s about a young man looking for direction in life, “sleeps with the ladies all night, home in the morning light, to nothing”. Possibly in part autobiographical, in part about some of the fans and people Mott encountered on the road. “Probably one of the best songs I ever wrote,” says Hunter, and while I don’t agree, it is pretty good.

Next up is another Ralphs track, Home is where I want to be. Literally true, apparently, as the band was touring incessantly and a bit of time at home must have seemed very attractive. Some nice organ twiddles from Allen.

Now, that Croydon live album was not entirely forgotten, because the final track on Wildlife comes from that recording. Keep a Knockin’, by Little Richard, is a cracker. Stretching over nearly 10 minutes, it captures the band’s live sound very well, full of energy, and with Hunter urging on the audience during the track’s extended jam. “Listen, contrary to what various people say, this is the best possible form of music there ever was,” he says. “Just this,” adding, “it’s all a load of bullshitt.” The jam continues with excerpts from Roy Orbison’s Mean Woman Blues, Whole lot of Shakin’ by D C Williams, and Jerry Lee Lewis’s Tell me what I’d say.

Well, if rock is the “best possible form of music,” why was the band messing about with country? That perhaps is what the fans asked themselves, and although the band felt they had delivered an album with a bit of everything, it was not particularly well received. A shame as there isn’t a bad track on it.