I signed up today for Spotify. This is a music service that like all the best innovations can be explained in a few words. You download the client (Mac or Windows), which has a Mac-like user interface for searching and playing songs. You type in a search, double-click a song in the result list, and it plays. When it finishes, it plays the next one in the list. 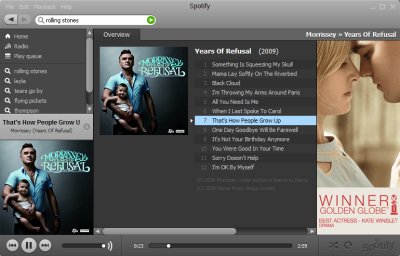 So far it has worked flawlessly. Performance is the key. Searches are fast, and songs seem to start playing instantly – impressive. Now and again an advertisement plays in between songs – it’s not too intrusive, but for a ad-free experience you can sign up to a premium subscription, currently £9.99 per month or £99.00 per year.

A few technical details: according to the FAQ, Spotify uses both streaming servers and peer-to-peer connections. It also grabs up to 10% of your hard drive (user configurable) for local storage. The codec is “Ogg Vorbis q5 which streams at approximately 160kb/s.”

The selection of music is not comprehensive; last month a number of songs were withdrawn “…so that we implement all the proper restrictions that are required by our label deals.” Nevertheless, the selection is wide and includes many mainstream artists. The latest Lily Allen is there; so is the latest Morissey as illustrated above. A search for Beethoven revealed 9,302 tracks; Mozart 14,148. Most people will find plenty of music they like.

In 1999, Shawn Fanning created Napster, a peer-to-peer music sharing service that allowed users to share MP3 files. It was wildly popular and illegal, and introduced the download era to a mass market. Download is about amassing a collection of music files on local storage and playing them through a computer or over a network. Ripping a CD is really just another way of downloading it.

The company that has profited most from the download era is Apple, with its market-dominating iPod/iTunes combination.

There is none; and all-you-can-eat streaming is the natural successor to the download era.

That does not mean we are there yet. Format changes in recorded music are not instant; there is a long transitional period. You can still buy LPs today; CDs remain a major source of revenue for the music industry; Spotify will not kill iTunes overnight. Audiophiles will not be satisfied with Spotify’s lossy-compressed music format for serious listening.

Further, Spotify has some limitations. Playing on mobile devices is one problem that will not easily be solved, bearing in mind that while broadband internet at home is now widely available, fast mobile connections remain expensive and unreliable.

History also suggests that Spotify will not necessarily be the company that makes this a business success. The music companies might panic and remove their works from Spotify. Apple might buy the company, and/or transition iTunes to a similar subscription-based streaming service. You can be sure it will not stand by and watch as its music business become irrelevant.

Nevertheless, even a day with Spotify is enough to make the idea of only being able to play what you have already downloaded seem quaint and unnecessary.

4 thoughts on “Spotify is the new Napster”