Duane Nickull is Senior Technical Evangelist at Adobe and co-author of Web 2.0 Architectures which I reviewed recently. He is also Duane Chaos of grunge band 22nd Century and entertained us at the Adobe MAX party last night in Los Angeles. 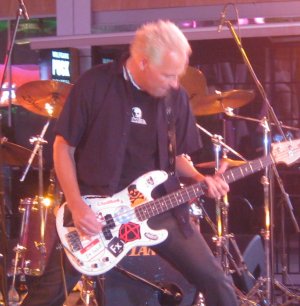 It’s appropriate that he works for Adobe, whose Flash runtime has parallel chameleon characteristics. Most of the time it is delivering annoying ads, games or silly videos; but it also turns up as a flexible cross-platform client runtime for Enterprise applications.

We saw this demonstrated yesterday in an excellent session on scaling Flex for a large trading application, given by the developers of Morgan Stanley’s Matrix application about which I have written before. This session was far more informative than the earlier online briefing, and a fascinating case study in how to create Enterprise-grade software.

Matrix was built by a team of around 30 Flex developers, over a period of between 18 months and two years. It uses a REST-based service layer which talks to a variety of Java and .NET back-end servers – we didn’t hear much about these – and delivering XML to the Flex client. The team did not use the Flash-optimised AMF protocol because the app uses Lightstreamer which did not support it at the time, though we were told that AMF would be advantageous and may be used in future. LiveCycle Data Services were ruled out because of lack of support for edge server deployment; again, this has apparently been fixed in the latest LiveCycle so migrating in that direction is possible.

Matrix uses the Cairngorm 3 architecture, which specifies best-practice design patterns for Flex, implemented using the Parsley Application Framework. The application is modular, and we heard a lot about how rigorous module encapsulation makes a large application like this – 600,000 lines of Flex code – manageable, reliable, flexible and testable. One module cannot access the implementation details of another, and a message bus handles communication.

I was also impressed by the attention given to performance. Another advantage of using modules is that they are loaded on demand, reducing the load time and memory footprint. Each module is profiled separately. The team also found that a big factor in Flex performance is efficiency in managing redraw regions – apparently Flash can easily be sloppy about this and redraw regions that have not actually changed. The team patched the UIMovieClip component to overcome problems in this area.

A model-view-controller architecture is used for the user interface, and this enables better testability. The team uses continuous integration to maintain quality.

According to the session presenters, the result is an application that has the high performance required of a financial trading application, and can run for extended periods without issues.

Although I had the impression that developing Matrix has been bleeding edge at times, with the team using beta software to get access to new features, there was also evidence that Adobe was responding to issues and using this as an opportunity to improve its platform.

This makes a great case study for those sceptical about whether the Flash runtime is really capable of powering Enterprise clients, or for any Flex developer.