Adobe has released an “experimental technology” codenamed Wallaby on its Adobe Labs site. Not all Adobe Labs projects become fully released products, but it is an indication of serious interest. The experiment was first previewed at the Adobe Max conference last year.

Wallaby is an Adobe AIR application for Windows and Mac. The tool is simplicity itself: just select a .FLA file and convert it. 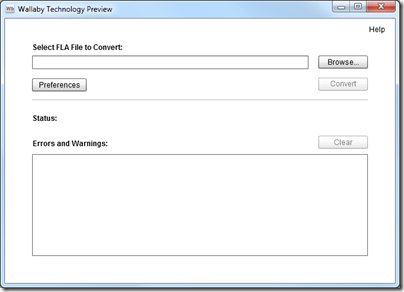 .FLA is the format of Flash projects, not Flash output. gauges

According to Adobe’s John Nack Wallaby has limited goals, focused on “converting typical banner ads to HTML5.” It is aimed at WebKit-based browsers, the implication being that Adobe’s main intent is to enable Flash ads to work on Apple’s iPhone and iPad, though it also works on Google Chrome and Apple Safari on the desktop. There is no ActionScript conversion, though you can edit the exported project after conversion and add your own scripting.

ActionScript is based on JavaScript so a conversion tool should not be too hard.

The fascinating aspect of Wallaby is in its potential. Users do not care whether a web site or application uses Flash or HTML5; they just want it to work. Adobe’s primary strength is in its design tools. One possible scenario is that Adobe might gradually extend its HTML5 support so that the tools are applicable for both platforms; Flash could become a workaround technology for legacy browsers.

No doubt Adobe would rather see the Flash runtime used everywhere but at least the company has a plan B. If, for example, Apple comes to dominate personal and mobile computing and continues to block Flash wherever it can, then that is important. Adobe already has a Flash to iOS packager for apps; now it has the beginnings of a solution for in-browser Flash on iOS as well.

Update: revised post with more detail about what is not supported.