The most remarkable statement in the report from the US Federal Trade Commission’s investigation of Google is this one:

The FTC concluded that the introduction of Universal Search, as well as additional changes made to Google’s search algorithms – even those that may have had the effect of harming individual competitors – could be plausibly justified as innovations that improved Google’s product and the experience of its users. It therefore has chosen to close the investigation

In other words, the FTC did not find that there was no bias in Google’s search results. It found that bias is OK if it “improves Google’s product and the experience of its users”, a phrase which is something I would expect to hear from a company’s own public relations team, not from a government report.

It is an extraordinary conclusion and runs counter to normal expectations of what a government body investigating anticompetitive business practices would be likely to support. It does make me wonder if the FTC appreciates the power of Google over which web sites are visited; given the use of the search engine by people such as students and journalists the company has remarkable potential influence over a wide range of human knowledge, as well as the power to make or break a company for which the web is critical either for direct sales or for marketing.

I also wonder what precedent it sets. In other words, can any company justify activities that harm competitors unfairly by claiming that they “improve the experience” of customers?

Update: It looks like the EU may take a stronger line, according to this article in the Guardian. From which I cannot resist posting a screenshot. 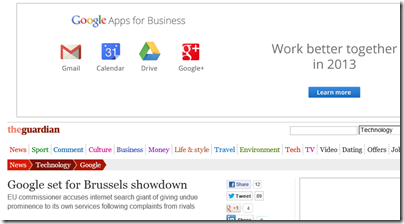 13 thoughts on “Extraordinary: the FTC says it is OK for Google to bias search results in its own favour”