A freelance journalist since 1992, Tim Anderson covers a wide range of technical topics. He is able to write for specialist readers in areas such as programming and web development, but also has the ability to engage the general reader. His work has appeared in publications including Guardian Technology, The Register, bbc.co.uk, Computer Weekly, Hardcopy, v3, IT Expert and  ITJOBLOG, as well as the popular blog at ITWriting.com. Some examples are linked at the foot of this post.

“Tim Anderson is one of the very few tech journalists who really, really gets the RIA space. He knows all of the technologies from the major companies and how they’re meant to be used.” Ryan Stewart, Adobe

“[Joe Wilcox] and Tim Anderson are the only writers I’ve felt stick to the basics and less about soapboxing” Scott Barnes, Microsoft

“The article by Tim Anderson – Windows 7 vs OSX 10.6 – is one of the best reviews I have ever read. Unbiased to the extreme. Bravo!” Sergie Kaponitovicz, Register reader. 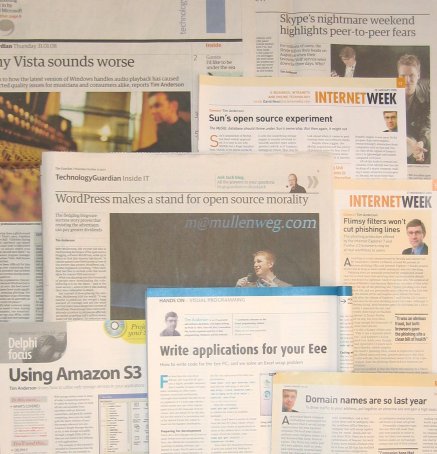 Ten years of .NET – Did Microsoft deliver? (The Register)

Azure: it’s Windows, but not as we know it (The Register)

First MeeGo Linux needs love and scrub up (The Register)

How CDs are remastering the art of noise (The Guardian)

Review: X-mini KAI, a Bluetooth audio dock you can put in your pocket (Gadget Writing)

How Captcha was foiled: Are you a man or a mouse? (The Guardian)

Getting to grips with Windows 7 (The Guardian)

The PDF is dead, long live the PDF (bbc.co.uk)

3 thoughts on “About IT Writing”