VMWare has announced its Mobile Virtualization Platform for Mobile Phones. The idea is that you run apps within a virtual machine on your device:

Because VMware MVP virtualizes the hardware, handset vendors can develop a software stack with an operating system and a set of applications not tied to the underlying hardware allowing them to deploy the same software stack on a wide variety of phones without worrying about the underlying hardware differences. At the same time, by isolating the device drivers from the operating system, handset vendors can further reduce porting costs by using the same drivers irrespective of the operating system deployed on the phone.

One of the benefits claimed is the ability to switch VMs, for example between home and work versions, and the ability to migrate to a new device by copying the VM from one to another.

No mention of Apple or iPhone, of course.

Update: I got a little more info from VMWare about this. This is a bare metal VM, so there is no host OS as such. The implication is that you cannot run both the VM and another OS, as on a PC; the VM in effect replaces the OS. This isn’t a product you will be able to buy for your mobile; it will come pre-installed, presuming VMWare is successful in marketing it to mobile phone manufacturers and telecom providers.

The technology comes from a company called Trango which VMWare has acquired. There is a bit more information about the product on Trango’s site.

According to a release today from Moneysupermarket.com, promoting its recycling service, two-thirds of us (in the UK) don’t recycle old handsets. The worrying aspect of this is that handsets include some nasty chemicals (mostly in batteries) which should be disposed of safely. Many people either don’t know or don’t care about the regulations and throw old phones in the bin, whereupon they end up in landfill. Of course you could say the same about laptops, iPods, shavers, and no end of other electronic devices with rechargeable batteries. Moneysupermarket.com made a model out of old phones to make the point (that’s London’s Post Office Tower in the background):

I am not sure about the recycling service – you might do better on eBay, except for worthless old devices. Still, I do think this is a problem that should be addressed. I hate the casual manner in which we chuck poison into landfill, risking it finding its way into the foodchain. A good start would be to regulate against the business model of the major telecom providers, which subsidises the hardware thus encouraging users to change their devices long before they are really worn out.

I may have missed a few things. I’ll check out the press conference later and see what the score is.

During the keynote at Google Developer Day London, Android evangelist Mike Jennings gave us what he says is the first showing of an actual device – prototype, of course – in Europe. I took a few blurry pics. 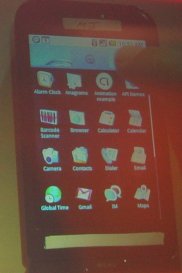 Perhaps inevitably, it seems reminiscent of Apple’s iPhone. It even has an accelerometer so you can code it to respond to tilts and turns. 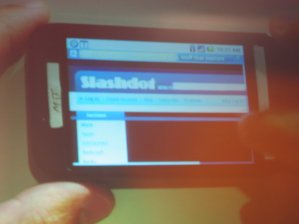 The web browser is based on WebKit, of course.

We were shown a spinning cube created in Java using an OpenGL library. The Android SDK is based on JDK 1.5.

Another thing that was mentions is Gears for Mobile. Now that Gears has a geolocation API it will be particularly useful in this context.

The LG Viewty (KU990) is a decent camera phone which came out last year in the wake of the first iPhone; yes it is me-too product but it has a few advantages over Apple’s product, like an 5 MP camera.

The trouble is, there are niggles, some minor, some major – like video recordings losing sound. A little over six months on, and users are posting messages like this:

I have to admit that I hate this phone. I have had mine six months now and I have regretted it for some time. It’s unresponsive, the camera is poor most of the time, it’s really awkward to use. It’s very slow at taking photos. It can’t hold a signal. The battery life is getting poor. It won’t handle many music file types very well. It feels like a Beta phone. The support from LG is non existent. I’m so disappointed. I look at apple, and yes, people did have to fork out for their phones, but look at the level of support and development they’re getting – new stuff is being added all of the time. It almost feels like they built this phone as a test for some of the features to go into other products.
The best thing about this phone is the video, and I love that part of it. I have some real magic moments captured and I’m grateful. But that is it.
I speak for myself, but I will never get another LG phone, period. As soon as I can get bought out of my contract the better.

It is a big change in mood from when the Viewty was released. This huge thread on the What Mobile forum has the story. Early adopters loved it – except for a few niggles which they hoped and expected would be fixed by a firmware update.

There has been no firmware update. Presumably all the software folk at LG have moved on to the next shiny device. Viewty users feel abandoned.

This seems like a good case study about not getting Web 2.0. Ironically LG made an effort to exploit social networking when the Viewty was launched. LG contacted bloggers and and offered phones for review; I reviewed it here. There is an official LG UK Blog – which sadly is pure marketing fluff and has done nothing to engage with the community over the issues which have been raised. There is an official Viewty website that has lots of Flash multimedia but little substance.

Yesterday I wrote about purchase decisions that begin with a Google search. Mobile phones are a good example. Anyone who does their Web homework will be put off the Viewty; and indeed deterred from newer LG models because the same thing will likely happen again. Network effects work both ways; even those who do not live on the Web will be influenced by opinion-formers who do.

It seems to me that a relatively small investment in communication and post-release software update and support would yield significant improvement in sales.