If you are in the unfortunate position of having a broken Canon MX700 all-in-one printer this is for you. Correction: if you have a broken Canon MX700 and you are foolish enough to want to try and fix it yourself, this is for you. Especially if the print head is stuck on the right hand side, and you get error 5100, or error 6a80, or a loud screeching noise. I realise therefore that this post is of interest to very few people.

Never mind, it gets worse. This unit is not all that easy to take apart, and most things are clipped in place rather than screwed. It is very likely that some clips will break when you take it apart. It is also very possible that once you have taken it apart you still will not fix it, or that you will make it worse by breaking more things. I can also guarantee that you will get inky fingers, because I doubt you will be successful fiddling about with innards of this printer wearing gloves, and probably broken fingernails.

Unless of course you are a Canon engineer and do this all the time, with the benefit of a service manual if you need it, in which case perhaps it will afford you some amusement.

Note: if you just have the 5100 error but the print head unit is not stuck, you might not need to disassemble the printer. Many have found that simply cleaning the timing strip is enough. See here for details. Another common problem is paper jams. Do not resort to disassembly unless you really need to do so.

Please do not proceed unless you understand all of the above and will not blame me for the continuing malfunction of your printer, or its damage beyond repair.

Now with that out of the way I will tell you how I fixed my MX700. The story goes back some time, to when I got error 6a80 and ranted about the price of ink cartridges. At that point my print head was not stuck on the right hand side – in fact it was parking itself incorrectly on the left. I reached the point of discovering a sliding part on the right that temporarily fixed the 6a80 error, and enabled the print head to park correctly on the right, but it went wrong again if I tried to print. I left it alone until I had a few spare hours.

That was today. I needed to make a photocopy, and my spare printer is not an all-in-one, so I set about trying to fix my MX700. I poked around a bit on the right trying to ease the plastic moving parts, but I did the wrong thing somehow, and instead of error 6a80 I had error 5100 and the print head was stuck firmly on the right. Bad.

Just to explain, if the print head is stuck on the right it is pretty much inaccessible. You can rock the print head or tug on it gently, but that is about it.

Of course I Googled. Some solutions said to remove the right panel, but I could not see how to do that. One guy said he successfully took his MX700 apart but did not say how. I decided to have a go. Here is how I did it.

First disconnect all cables. I don’t really need to say that, do I?

1. Remove the right and left silver side panels. Start prising them apart at the top; it may help to tug up on the little tabs you can see on the inside. They are just clipped on and eventually pull away. Remove the silver panel on the front right corner too.

2. Remove the hinged front right panel that covers the card slot. Try not to break the bottom protrusion that forms part of the hinge. Also remove the small black panel at front left.

3. Undo the four black screws on the back of the MX700, and one black screw from behind each of the front panels you removed in step 2. On the right-hand front panel, remove the small part that was attached with the screw you have just removed. 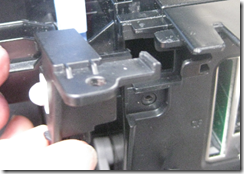 4. Now you can prise off the main black side panels on right and left. I found this tricky. Use a flat blade screwdriver to release two tabs marked with arrows on the inside top cover. The left hand panel I found easiest to start releasing at the back near the screws. I don’t have any easy way though, just use the right combination of tugging and prising until it comes free.

5. I am sure you have noticed that the top unit which has the scanner glass and top sheet feeder is still attached. Now you can remove it. The first step is to detach two connectors at the back left corner: 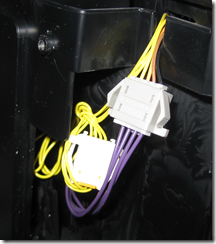 and to unplug the two white ribbon cables at the back right corner: 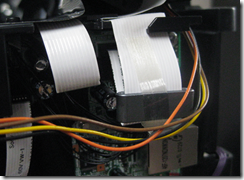 and unplug the connector towards the front of the right hand side logic board to which those yellow, brown and orange wires above connect.

6. Now unscrew two silver screws from the large toothed hinge at the back left, which you see when the top unit is raised. Once these screws are removed you can lift off the top unit, but take care, because the smaller of the two white ribbon cables is clipped in place at the back right. You need to thread this out from under those clips before you can safely lift the top unit free of the bottom unit.

7. At this point you can place the top unit somewhere safe and congratulate yourself – first phase completed successfully. 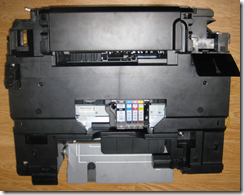 The next step is relatively easy. First unplug the small two wire connector at front right, with cables that run into the top black panel. Then remove four silver screws from the top black cover – one in each corner – and prise it off. Pretty easy compared to the side panels.

At this point if you are lucky you can persuade the print head unit to slide to the left and inspect the right hand area, which has all sorts of interesting features. 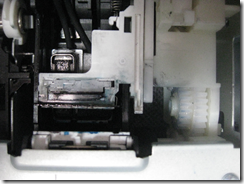 If you gently rotate the large gear on the right by pushing it back along the top – in other words, counter-clockwise as seen from the left – you can see the wipers move forward and back and the purge pads rise and fall. The wipers can get stuck in a forward position; this is one possible cause of the 6a80 error. I took the opportunity to do some cleaning up and to apply a little white lithium grease to the plastic moving parts – take care not to get this on the wipers though. I made sure the print head was moving freely, then I re-assembled the printer and hoped the job was done.

Re-assembly by the way is pretty much the reverse of disassembly. The hardest part is threading the white ribbon cable back into the clips at the back right – you have to hold the top unit in one hand while threading the cable with the other, or get a friend to help, or do your own thing with imaginative supports.

Unfortunately in my case after I re-assembled the machine it STILL DID NOT WORK. The print head promptly got stuck again on the right. I did not give up; I took it apart again and went even further. So read on if you want to know more.

When I got back into the cavity on the right hand side where all the action is, I noticed a spring out of place under a white plastic arm on the right. I corrected this, re-assembled, and it STILL DID NOT WORK. I got loud screeching, then a 5100 error. I was about to chuck the MX700 in the skip, but read something on the web about the screeching being caused by a dirty timing strip. Was it worth a third attempt? Maybe. I decided to have a go.

This time I had real difficulty persuading the print head to budge. I removed the ink cartridges and lifted out the print head so I could put it out of harm’s way. I also found a tiny spring rolling around and did not know where it had come from. All bad news. Finally I pulled with considerable force on the print head unit. It moved to the left, but also a strip of white plastic came free. While this was depressing, I did notice that the white strip included a notch that matched the tiny spring. Maybe bad news could be good news.

Clearly the whole print head unit would have to come off. I discovered the way to do this.

First, remove the delicate timing strip. This is easily done; just unclip it from the springy clip at the right and pull it out. Note that it goes through the print head unit, not just behind it. Put it somewhere safe.

I reassembled one last time. With no great expectation I turned on. Humming, whirring, no error. I did a test print. 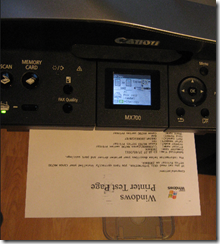 Amazing. Well, I admit there are some funny smudges on the print and I don’t know why. Still, it is a big step forward from error 6a80 or loud screeching. Maybe I can fix it …