Google has released Cloud Connect for Microsoft Office, and I gave it a quick try.

Cloud Connect is a plug-in for Microsoft Office which installs a toolbar into Word, Excel and PowerPoint. There is no way that I can see to hide the toolbar. Every time you work in Office you will see Google’s logo. 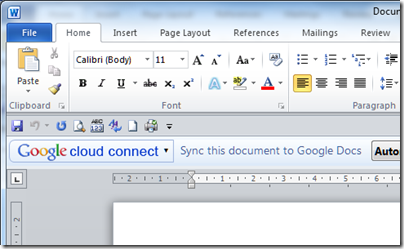 From the toolbar, you sign into a Google Docs account, for which you must sign up if you have not done so already. The sign-in involves passing a rather bewildering dialog granting permission to Cloud Connect on your computer to access Google Docs and contacts on your behalf.

The Cloud Connect settings synchronise your document with Google Docs every time you save, or whenever the document is updated on Google’s servers. 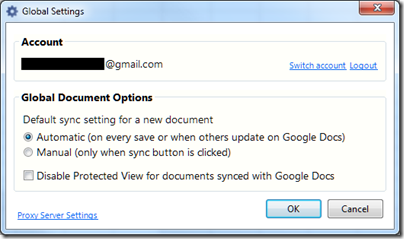 Once a document is synched, the Cloud Connect toolbar shows an URL to the document:

You get simultaneous editing if more than one person is working on the document. Google Docs will also keep a revision history. 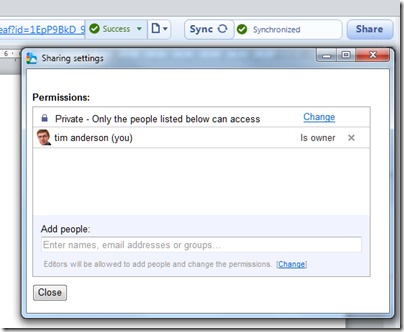 I found it interesting that Google stores your document in its original Microsoft format, not as a Google document. If you go to Google Docs in a web browser, they are marked by Microsoft Office icons.

If you click on them in Google Docs online, they appear in a read-only viewer.

That said, in the case of Word and Excel documents the online viewer has an option to Edit Online. 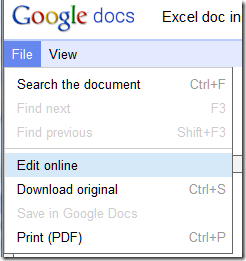 This is where it gets messy. If you choose Edit online, Google docs converts your Office document to a Google doc, which possible loss of formatting. Worse still, if you make changes these are not synched back to Microsoft Office because you are actually working on a second copy: 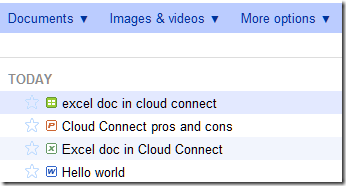 Note that I now have two versions of the same Excel document, distinguished only by the icon and that the title has been forced to lower case. One is a Google spreadsheet, the other an Excel spreadsheet.

Google makes the point that Office 2010 lacks web-based collaboration unless you have SharePoint, and says its $50 per user Google Apps for Business is more affordable. I am sure that is less than typical SharePoint rollouts – though SharePoint has other features.  The best current comparison would be with Business Productivity Online Standard Suite at $10 per user per month, which is more than Google but still relatively inexpensive. BPOS is out of date though and an even better comparison will be Office 365 including SharePoint 2010 online, though this is still in beta.

Like Google, Microsoft has a free offering, SkyDrive, which also lets you upload and share Office documents.

Microsoft’s Office Web Apps have an advantage over Cloud Connect, in that they allow in-browser editing without conversion to a different format, though the editing features on offer are very limited compared with what you can do in the desktop applications.

Despite a few reservations, I am impressed with Cloud Connect. Google has made setup and usage simple. Your document is always available offline, which is a significant benefit over SharePoint – and one day I intend to post on how poorly Microsoft’s SharePoint Workspace 2010 performs both in features and usability. Sharing a document with others is as easy as with other types of Google documents.

The main issue is the disconnect between Office documents and Google documents, and I can see this causing confusion.

Update: I uninstalled Cloud Connect after a couple of days. Two reasons. First, the chunky toolbar is annoying and takes valuable working space. Second, I had performance issues when working with documents opened from SharePoint. I guess the two do not get on well together.

Microsoft has its own unsurprisingly negative take on the product here. Apparently Cloud Connect uses the Track Changes feature under the covers, hence breaking this feature for any other purpose. If so, I would like to have been warned about this. On the other hand, I still like the usability of Cloud Connect. Microsoft is right to observe that auto-sync could result in inadvertent document sharing; but the simple and prominent sharing dialog is easier to use than SharePoint permissions.

6 thoughts on “Hands on with Google Cloud Connect: Microsoft docs in Google’s cloud”