I am a fan of Wordament for Windows Phone and Windows 8. This is a Metro-style app. I was annoyed though to discover that it was broken on my Windows 8 slate. That is, it could not be launched because it did not exist when searching the Start menu, nor in the “All apps view”, but it could not be installed because the Store considered that it was already installed.

I could go into Store – Settings – Accounts and see it listed under “View your apps”, where it also said it was installed.

There was some kind of warning of problems, in that from time to time Windows 8 had been offering to fix a problem with Wordament, usually after I had set the slate to sleep while the app was running. When prompted, I always accepted and let it do its stuff, but the result of the last effort was the app had disappeared completely.

How to fix this? I found one piece of official advice for a similar problem which suggested refreshing the PC. This is not much fun because you lose all installed applications other than Metro apps – ugh. I did a bit of digging.

My first thought was to try manually deleting the app to see if I could trigger a reinstall. I got a little way with this. I found that Metro-style apps are installed into the WindowsApps folder, which is a sub-folder of Program Files. However, if you double-click this folder you get an access denied message, though the message also invites you to continue.

I did not wish to trample all over the security features of Windows 8, though following a hunch I did try restarting in safe mode. You can do this by choosing Settings – More Settings and clicking Restart now under Advanced startup. The PC restarts and you get to a “Choose an option” screen where you can click Troubleshoot. Next, click Windows Startup Settings and then Restart. This gets you the familiar F8 options including Safe mode.

In Safe mode you have read-only access to the WindowsApps folder, and there I could see the Wordament install files. 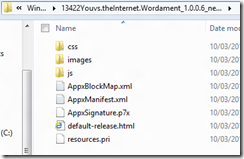 Here you can verify that this is an HTML and JavaScript app, just as its creators said. The JavaScript is minified so opening it up is not all that rewarding. 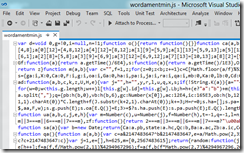 Still, I could confirm that the app was in fact installed, but I could not run it.

I had another idea. If all I needed was a shortcut to the app, perhaps I could grab one from another profile on the machine. I restarted in normal mode, created another user (which must be one with a Microsoft Live ID) and logged in as that user (shutdown /l logs off without shutting down). I installed Wordament, and it ran fine.

So where are the per-user shortcuts? Easy, just go along to c:\users\[username]\AppData\Local\Microsoft\Windows\Application Shortcuts and there they are.

Again I had to grab permission to access this folder, but doing this in a user folder is not so bad as in a system folder.

I copied the shortcut to the same location in my normal home folder and lo, Wordament reappeared in the Start menu. 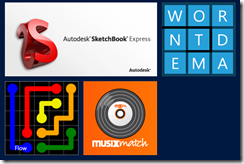 Not too bad; but it seems to me that Windows 8 should have a built-in way of fixing this kind of problem – perhaps it has, and I missed it.