I attend numerous technical events, most of which are vendor-specific. There is nothing wrong with vendor-specific events. If you want to explore what is on offer from that vendor and quiz  their people, they are ideal. You will be aware though that they are promotional events and give you a skewed view of the world, for which you need to make allowance.

Therefore I particularly value events which are not vendor-specific. They may still offer a skewed view of the world, but at least it is vendor-neutral. Redmonk’s Monki Gras is one such, managed by analyst company RedMonk, in particular by its co-founder James Governor. 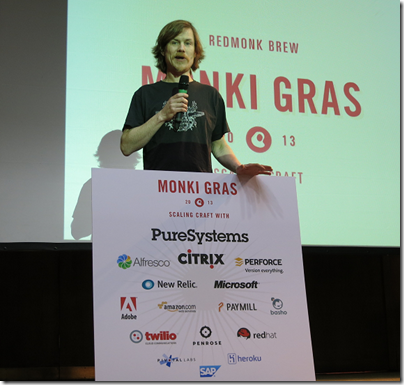 The event is small, with around 200 attendees, with a bias towards software developers. Seeing the picture above you will observe that it is not entirely vendor-neutral, in that it is sponsored by companies including Amazon, Adobe, twilio, Red Hat, Citrix, SAP and Heroku. Multi-vendor then, rather than vendor-neutral? Arguable, but there was little patience for product pitches and the event was one which was able to hear Basho’s Shanley Kane telling us to discard all our tools (a move unlikely to please vendors), so on a scale where zero is pure marketing fluff and ten searing honesty, I would award it at least an eight.

The Monki Gras is not just about technology. It is also about craft beer. This its second year, and there was even more beer content this time around. Possibly (said sotto voce) more than you might prefer if you have only a passing interest in the subject; but if so, perhaps this was not the right event for you. 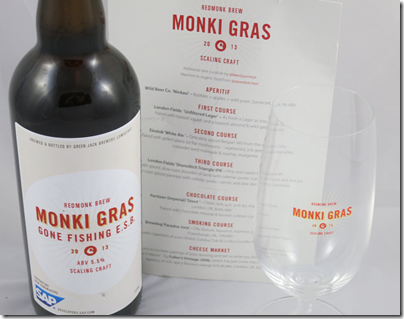 Why the beer? Because developers like it. Because it is a craft that does not scale easily. Because it is characterful, flavoursome and distinctive, and individual examples aspire to excellence, all qualities that I suspect Redmonk value.

The combination of Redmonk values, generous sponsors and small size make this an event with exceptional catering. Not only craft beer, but also fresh fruit, Sushi, fresh ground coffee prepared by a skilled barista, and at the evening event, a breathtakingly good selection of cheeses of which I got to taste only a few slivers because my hotel arrangements required an early departure. 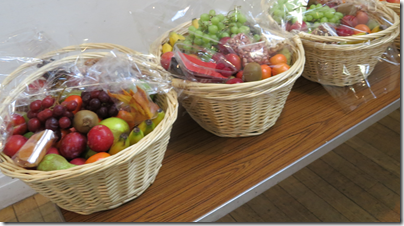 One of the ironies of the Monki Gras is that this kind of excellence does not scale well, with long queues for coffee and lunch, and on the Thursday evening one of the slowest meals I have attended. I left after three hours by which time it had reached the third course, but missed dessert and cheese. Good things take time and I guess this is all part of the Monki Gras experience.

What about the technical content? Technical may be the wrong word; and the published agenda is only an approximate guide. A Twitter search is one way to discover what was said; or you can check my tweets for those days; despite poor wifi there were enough smart gadgets that plenty of tweets got through. The focus was on the human aspect of software development, summed up for me by Cyndi Mitchell of Logspace and Thoughtworks, who said:

Software is fundamentally a human, interactive activity – if you don’t understand that, forget it.

Here are some other highlights, not comprehensive, but some of the things which caught my attention.

Rafe Colburn from Etsy who observed that to improve the craft of software development, you need to make time available by automating whatever you can.

Craig Kersteins and Matt Thompson from Heroku talked about developer productivity, with the startling statistic (I have no idea how they get these figures) that 76% of the worst-performing engineers suffer frequent interruptions. Software development needs focus; they suggested 4 hours of continuous uninterrupted work each day. At Heroku they use headphones as a “do not disturb” sign and respect that.

That risks the opposite danger, lack of communication. Hence another Heroku strategy is to give staff free lunch with long tables, to promote communication, and slow coffee machines that make a jug at a time, to promote sharing and collaboration.

Mazz Mosley and Nick Stenning from the Government Digital Service – which is transforming UK government IT from the inside, with generous use of open source and common sense – spoke on not recruiting developer rock stars, who create a single point of failure in your team. Rather, they aim to nurture collective intelligence.

This talk went down well at the Monki Gras, but while the thought makes sense, it intrigues me. Could the same person who becomes a “rock star” in one team be part of “collective intelligence” in another? Is not this more about how you manage your team, than how you recruit? And could a key leader that creates such a team be a bit of a rock star for doing so?

Phil Gilbert from IBM spoke about transforming IBM’s software products with design and rationalisation. The slide that has stayed with me showed how 20+ products in the areas of business process management were consolidated into two or three.

Chris Thorpe from Boffin talked about steam engines and 3D printing. Using 3D printing, steam engines can be repaired, while in another context model railway enthusiasts can get models in whatever size they want.

Steve Citron-Pousty from Red Hat gave us a sideways look at technology by talking about ecosystems. How do you nurture a vibrant ecosystem as opposed to one in which just a few creatures dominate? The answer is about monitoring, measuring, and testing hypotheses.

Ted Nyman at GitHub gave a memorable talk on being happy at work. His answer: no managers. 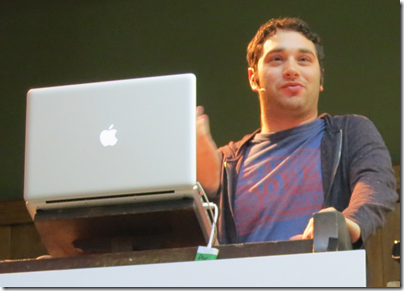 He described how GitHub is managed: nobody reports to anyone else, decisions are made by consensus, teams form naturally, nobody is forced to do anything, but individuals are highly motivated because they have authenticity and autonomy. Employees are happy and nobody ever quits. “Developers are awkward people, accept awkwardness,” he added.

This was another thought-provoking talk. How much of GitHub’s management model would translate or scale to other businesses? Does it depend on having smart, highly motivated team members? Will it work for ever, or end in disaster? Is Nyman’s description accurate, or are there disguised channels of authority which he did not articulate?

Day two, Friday, opened strongly. I have already mentioned Shanley Kane’s talk. She addressed the problem of dishonesty in software development, explaining that software roadmaps which show features on a timeline are inherently dishonest and cause erosion of trust. Developers have a responsibility to explain to others in the business that development does not work like that. Her suggested alternative is some sort of interactive document covering “what we’re working on”.

Cyndi Mitchell, also mentioned above, talked about excellence in software development. This is not just about technically sound code, but is multi-faceted, including business value, customer value, user experience, delivery and operations as well. It was another take on a common theme in Agile: the team is everyone, not just the developers.

Chris Aniszczyk from Twitter spoke about open source software. Twitter always evaluates open source options before risking wheel reinvention by cutting new code. He also advocates always writing code on the assumption that it will one day be open source. This promotes high quality APIs, sensible naming conventions, and other good things. Twitter aims to give code that is not its “secret sauce” back to the community, he said. However, Twitter avoids code with viral open source licenses like the GPL; it causes too many problems, he said.

An intriguing aside; Aniszczyk says that Twitter acquires companies to get the people, since “you can’t hire engineers these days.” This may create an open source project, as the code that company was working on is given away/abandoned to the community. I am not sure what examples of this process there are.

After that, there was lunch, more beer, brewers spoke, and a wood carver competed with a 3D printer to make a spoon; I’ve written about this here. 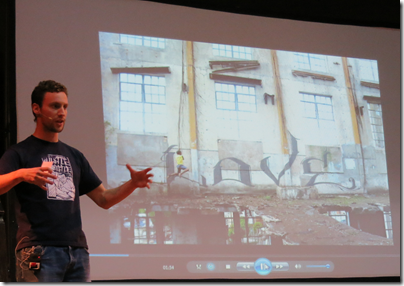 There is no event quite like the Monki Gras; it was not deeply technical but was rich in ideas. Plenty to reflect on.