The Start button is coming back. At least, that’s the strong rumour, accompanied by leaked screenshots from preview builds. See Mary Jo Foley’s post complete with screen grab, though note that this is the Start button, not the Start menu. Other rumoured changes are boot to desktop by default, and the All Apps view by default in the Start screen.

Will this fix Windows 8? Absolutely not.

There are two reasons. First, in one sense Windows 8 does not need fixing. I’ve been running it from the first previews, and find it solid and fast. The new Start screen works well, and I’m now accustomed to tapping the Windows key and typing to start apps that are not already on the taskbar. It is a better app launcher and organiser than what it replaces, though I am not excited about Live Tiles which are out of sight and out of mind most of the time.

Second, this kind of minor UI change will not address the larger problem, which is the lack of compelling Metro-style apps for the platform. Nor will it fully placate those for whom nothing but making Metro completely invisible is acceptable.

These revisions are intended to make Windows 8 more acceptable to a market that essentially does not want it to change. The core market for Windows is increasingly conservative, being formed of business users with a big investment in the platform who do not want the hassle of retraining users, and home users who are used to Microsoft’s OS and not inclined to switch. While this is a large market, it is also a declining one, with tablets and smartphones taking over many former PC roles, and Macs increasingly the platform of choice for high-end users who need the productivity of a full OS.

Rather than content itself with a declining market, Microsoft came out with its bold re-imagining of Windows, with a new tablet-friendly app platform, while keeping faith with the past by preserving the desktop environment. Predictably, this was not a hit with the conservative market described above; in fact, it was the last thing they wanted, confusing and alienating.

Microsoft made it particularly hard for these users by making the new Metro environment hard to ignore. The Start screen, some settings, default apps for file types including images, PDFs and music, and power button hidden in the right-hand Charms menu all cause confusion.

Only the modern app platform has the potential to lift Windows beyond its large but suffocating and declining market of change-resistant users. Unfortunately the first months of Windows 8 has been more or less the worst case for Microsoft. Existing users dislike it and new users have failed to embrace it.

A rough ride for Windows 8 was expected, though if the script had run according to plan there should have been mitigating factors. A wave of Windows 8 tablets should have delivered a delightful experience with touch while still offering desktop productivity when needed. Well, it has happened a little bit, but Windows 8 tablets have suffered from multiple issues including high prices, lack of availability, fiddly designs, and in the case of Windows RT (the ARM version) poor performance and confusing marketing. Here’s a review of the Lenovo IdeaPad Yoga 11 RT machine, from Ebuyer, which shows what can go wrong:

THIS IS NOT A LAPTOP. It runs the dreadful Windows RT which is NOT windows 8, but a very poor limited version of 8. You can only download what Microsoft wants you to have. It came with a free Norton. The dealer convinced me that the failure to be able to download this was my deficiency. NOT – Norton cannot be downloaded onto RT machines. Neither can any other security software except defender which is already on it. You cannot install Chrome (much better than Explorer) It does not accept I tunes, You cannot dispense with the Microsoft log in password, which I do not need. Where the instructions for how to change the settings are, is still a mystery – as usual THERE IS NO INSTRUCTION MANUAL IN PAPER. You have to hunt for everything or go to an online forum.

A shame, because personally I like the concept of Windows RT with its low power consumption and nearly tinker-proof OS.

Is there hope for Windows 8? Sure. The core of the OS is excellent on the desktop side, less good on the Metro side but this can be improved. The app story remains poor, though occasionally a decent app comes along, like Adobe’s Photoshop Express: easy, fluid, elegant photo editing which works on both ARM and Intel. 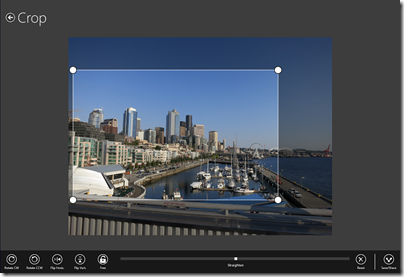 It is fair to say, though, that Microsoft and its partners have plenty of work to do if they are to make this new Windows a success.