Day one at Microsoft’s Build conference in San Francisco was Windows client day – including Windows Phone as well as full Windows. Two slides made the biggest impression on me. One was this one, the return of the Start menu to the desktop, and a Store app (the Mail client) running in a desktop window: 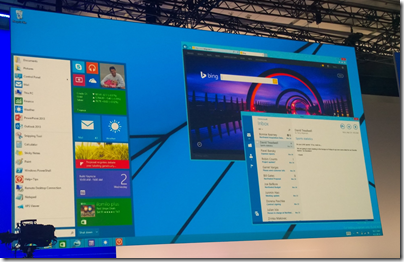 The other was this: Office redone for the Metro, sorry Modern user interface: 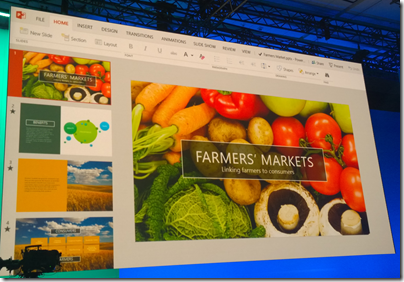 Note that Touch Office will run on Windows Phone as well as on full Windows. Microsoft has ported most of the Windows Runtime (WinRT), the software engine that runs the Modern UI, to Windows Phone. The new Office is written in XAML and C++ so will run on both platforms.

To some extent it has. Sinofsky’s Windows 8 was a purer conception, in which the whole focus is on the Modern environment and the desktop is presented like a legacy component, an app within the environment that happens to run all your old stuff.

Users rebelled, businesses swore to stick with Windows 7, and Microsoft has been gradually unpicking bits of it to make it more palatable to existing users. In Windows 8.1 we saw the return of the Start button and an option to boot directly to the desktop. In Windows 8.1 Update 1 we see a window bar appear across the top of Store apps, when the mouse is at the top of the screen, Store apps on the desktop taskbar, and the taskbar running at times across the Modern UI.

The security boundaries are getting slightly eroded, with an option for side-loaded apps (mostly the realm of enterprise deployments) now able to escape the sandbox and run legacy code.

Windows 8 vNext goes further. Store apps in windows: is there anything left of Microsoft’s tablet platform?

Well yes, there is. Store apps will still run primarily full-screen, and more important, will still use the new controls – menus, buttons, lists – that can be operated easily with touch. They still use the blocky “Metro” design concept, which for all its faults (it is not the most beautiful of UI concepts) is easy to operate without mouse or keyboard.

The other perspective on Microsoft’s shifting approach to the Windows client is that it is putting all its energy into promoting these modern apps.

Sinofsky’s idea was to push users into the Modern environment by making it the heart of Windows 8 – the Start screen. That did not work, so now Microsoft is taking a gentler approach but with the same goal in mind. If users are working mainly on the desktop, the argument goes, we will bring the apps to them there.

Windows 8.1 Update 1 discreetly plants a link to the Windows Store on the desktop taskbar, making this point perfectly.

For users who work on the desktop, Store apps will now be more visible, and more appealing again once they run in a desktop window.

For developers, there is another big change. They  can now target both Windows and Phone with a single app project, called a Universal App, so the effective size of the target market, though still small compared to Android and iOS, has significantly increased. Users can buy an app once in the Store and run it on both platforms.

The Universal App can be further extended to Xbox One, which also includes WinRT.

It is all about the apps – as it always was. If developers support Microsoft’s app ecosystem with renewed vigour following these changes, the future of Windows in the new mobile world does look brighter.

The forthcoming Office, you will recall, is also a Store app. You will finally be able to get real work done in the tablet environment.

Microsoft has not backtracked, in the sense that we are not hearing at Build about a renewed focus on the desktop. Rather, we are hearing about a more integrated approach to supporting both desktop and Store apps in Windows, but with the same goal as before, to make Windows an operating system fit for purpose on tablets.

It is worth recalling that Windows 8 was not only about supporting touch. The WinRT environment is also about security, where apps are sandboxed, and easy deployment via the Windows Store. This way Microsoft can prevent Windows from being wrecked by malware and other unwanted software.

What of Windows RT, the ARM version? With Office coming to the phone, I am more or less convinced that the next tablet-only Windows devices will be based on Windows Phone rather than Windows RT. You will have Office, but not the desktop, for better or worse. But no such announcement has yet been made.