Every app store finds its own balance between app quality and choice, which in turn opens the door to people trying to game the system with misleading titles or descriptions. Our approach has long been to create and enforce strong but transparent policies to govern our certification and store experience. Earlier this year we heard loud and clear that people were finding it more difficult to find the apps they were searching for; often having to sort through lists of apps with confusing or misleading titles. We took the feedback seriously and modified the Windows Store app certification requirements as a first step toward better ensuring that apps are named and described in a way that doesn’t misrepresent their purpose.

Although it is not mentioned, the post is likely in response to this article which describes the Windows Store as “a cesspool of scams”:

Microsoft’s Windows Store is a mess. It’s full of apps that exist only to scam people and take their money. Why doesn’t Microsoft care that their flagship app store is such a cesspool?

That is a good question and one which Brix does not answer. Nor are the complaints new. I posted in November 2012 about Rubbish apps in Windows Store – encouraged by Microsoft? with the extraordinary rumour that Microsoft employees were encouraging trivial and broken apps to be uploaded multiple times under different names.

The facts in that case are somewhat obscure; but there was no obscurity about the idiotic (if your goal is to improve the availability of compelling Windows Store apps) Keep the Cash campaign in March 2013:

Publish your app(s) in the Windows Store and/or Windows Phone Store and fill out the form at http://aka.ms/CashForApps to participate. You can submit up to 10 apps per Store and get $100 for each qualified app up to $2000. 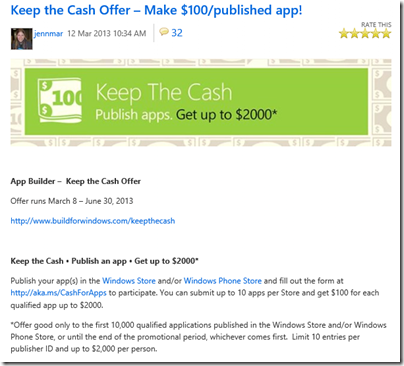 Microsoft decided to reward mediocrity – no, even that is not strong enough – rather, to reward the distribution of meaningless trivial apps in order to pad out its store with junk and make the actual high quality apps (yes there are some) harder to find.

I agree with the commenters to Brix’s post who call him out on his claim that “Our approach has long been to create and enforce strong but transparent policies to govern our certification and store experience”. How do you reconcile this claim with the torrent of rubbish that was allowed, and even encouraged, to appear in the store?

Every public app store is full of junk, of course, and it is hard to see how that can be completely avoided; if Apple, Google or Microsoft declined apps for subjective reasons there would be accusations of exerting too much control over these closed platforms.

That does not excuse the appearance of apps like Download Apple Itunes (sic) for PC, listed today under New & rising apps: 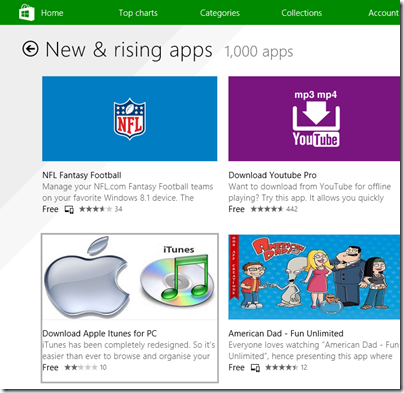 The app is nothing to do with Apple; it is a third-party downloader of the kind I analysed here. The idea is to persuade people to run an application that installs all sorts of adware or even malware before directing them to a download that is freely available.

It seems that users do not think much of this example, which apparently does not even do what it claims. 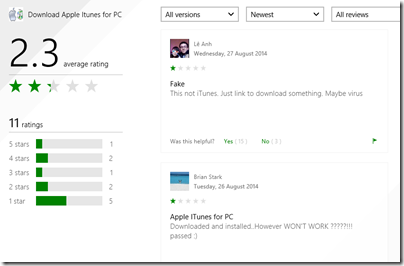 While apps like this are making in into the store, I do not see how Brix can justify his claim of enforcing “strong but transparent policies to govern our certification and store experience”.

Even VLC, where scammy apps have been largely cleaned up following many complaints, is still being targeted. Apparently Microsoft’s store curators are happy to let through an app called “Download VLC Letest” (sic). 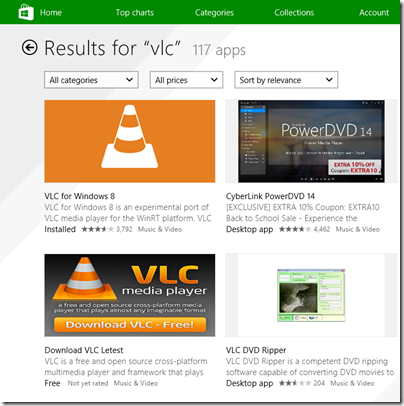 How much does this matter or has this mattered? Well, Microsoft launched Windows 8 at huge risk, trading the cost of unpopular and disruptive changes to the OS and user interface for the benefit of a new more secure and touch-friendly future. That benefit depended and depends completely on the availability of compelling apps which use the new model. The store, as the vehicle of distribution for those apps, is of critical importance.

Another benefit, that of protecting users from the kind of junk that has afflicted and diminished the Windows experience for many years, has been scandalously thrown away by Microsoft itself. It is a self-inflicted wound.

What could Microsoft do? It is too late for Windows 8 of course, but the correct approach to this problem, aside from not approving harmful and deceitful apps in the first place, is to take a strongly editorial approach. For less cost than was spend actually undermining the store by paying for rubbish, Microsoft could have appointed an editorial team to seek out strong apps and include within the store features that describe their benefits and tell their story, making the green store icon one that users would actually enjoy tapping or clicking. Currently there is too much reliance on automated rankings that are frequently gamed.

There are some excellent apps in the store, and teams that have worked hard to make them what they are. Apps to mention, for example, include Adobe’s Photoshop Express; Microsoft’s Fresh Paint; or Calculator Free. Those developers deserve better.