I am at the IFA consumer electronics event in Berlin, and have been struck by the number of new Windows 8 tablets on display. Some are hybrid laptop/tablet affairs, but there are also small tablets at keen prices (less than $199) which look superficially similar to Android tablets. 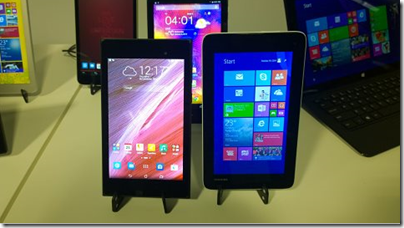 Under the covers though, they could not be more different. Android, like it or loath it, is well designed for tablets and low-maintenance for the user. Windows 8 on the other hand is a PC operating system with a split personality: apps that run in the don’t-call-it-Metro environment (Windows Store apps) and which work well with touch; and desktop applications most of which are hard to operate with touch.

Today’s PCs should also be low-maintenance; but they are vulnerable to badly behaved applications or even malware, applications that insist on installing themselves at start-up executables; applications that hijack file associations and cause confusion, and so on. Users have to understand the Windows Control Panel or burrow around in utilities like Task Manager and System Configuration (msconfig) to fix problems.

Microsoft foresaw this when Windows 8 was launched, and created a safer version of the operating system called Windows RT. It is perhaps not quite as low maintenance as Android, but since you cannot install desktop applications, all apps are sandboxed and can be easily installed or removed. Windows RT runs on ARM chipsets.

Unfortunately Windows RT was a flop, thanks to its confusing name and a lack of compelling apps in the Windows Store. Users seemed to be demanding “full Windows”, running on Intel chipsets, so that any Windows software can be installed.

There is no inherent reason, as far as I am aware, why x86 Windows cannot be locked down in the same way as Windows RT; this was a decision Microsoft made to differentiate the two. However they are not locked down, and therefore just as vulnerable and complex as any other PC.

The optimistic view is that the new wave of tablets will stimulate Windows Store app development and revive Windows 8. A Toshiba representative assured me that updates Microsoft made in Windows 8.1 had increased user acceptance of the new user interface.

I will not believe this though until we see Windows 8 tablets flying off the shelves in the same way as Android tablets or iPads; and further, I do not expect this to happen. Nor am I sure that they will be good for non-expert users; if they are like most PCs (and they are), they will get gradually slower and less usable as stuff (often unwanted) gets installed; Java, Ask Toolbar, Google Chrome and Toolbar, Silverlight, Flash, Adobe AIR and all the rest.

The current wave of tablets also makes me wonder what is the long-term thinking. With the near-demise of Windows RT, my expectation is that some future iteration of Windows Phone designed for larger displays will take its place, hopefully with full Windows Runtime compatibility or at least easy porting.

However, Windows 9 “Threshold” is also on the way. Are we going to end up with Windows 9 x86 tablets in form factors such as 7” and 8” tablets, as well as Windows Phone OS tablets in similar sizes? Or will Microsoft remove the desktop and lock down the OS in Windows 9 for phones and small tablets, to make it more like Windows RT, and call it Windows Phone 9?

CEO Satya Nadella speaks of “One Windows” but we are not close to it yet, and the developer story still seems uncertain to me. The one sure point is that Microsoft will use the Universal App concept to assist developers in targeting multiple Windows platforms (and perhaps even iOS and Android via Xamarin integration). The question though: what will those multiple Windows platforms look like a year or two from now?