At IFA in Berlin, I spoke to Dan Dery, VP and CMO at Alcatel OneTouch, who told me of the company’s plans for Windows Phone OS tablets. Alcatel OneTouch is part of TCL Corporation, a Chinese global electronics company, though for historical reasons (a 2004 joint venture between TCL and the French company Alcatel-Lucent) it has strong links with France; Dery’s first language is French. 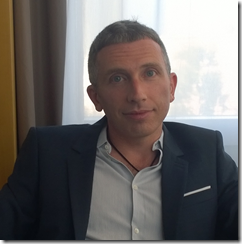 Alcatel was at IFA to launch new Android devices, primarily the Hero 2 smartphone and the Hero 8 tablet, but Dery particularly caught my interest when he started talking about future plans for tablets running the Windows Phone OS 8.2 (the current version of Windows Phone is 8.1).

Note that I am reporting on my press briefing with Alcatel; I have not heard anything from Microsoft about Windows Phone 8.2.

“Rumour has it that the Windows Phone is going to be available on tablet kind-of form factor on ARM chipset, and we are going to be first in doing that. For example we are developing a 10 inch tablet which has this Magic Flip technology for the keypad with trackpad.”

Magic Flip is Alcatel’s brand name for smart magnetic covers which fold back as stands and which are able to show notifications, so it sounds like Alcatel has something Surface-like in mind here. The cost will be similar to Android he implied – my guess is that Microsoft will charge little or nothing for the use of Windows in this context – and the devices will have LTE, so we are talking about connected devices.

But why will the market want an Windows Phone tablet, I asked?

“Compared to Android there is still a big advantage with the presence and natural integration of Office. To be fair, you start having it on iOS. It’s available, but integrated, that is probably a different thing. The simple fact, for most of the users who are interested in that kind of use case, to receive an email which has an attachment, to click the attachment, to open it, edit it, and resend it, that’s almost impossible today unless you are going into the Microsoft environment. That’s the standard for 20 or 30 years in the market, you are not going to change it overnight.

“There is a big advantage in Microsoft because they are probably the most advanced in driving an integrated solution between computer, tablet and smartphone. Everybody is going in that direction, but Android is probably not the easiest one for that.”

Today, something like full Office is available on Windows RT (as found in Surface RT), but not on Windows Phone, which has cut-down viewers and editors for Office documents. The implication is that Windows Phone OS for tablets will have something more fully featured.

I asked Dery if the Windows Phone OS is more efficient than Android on a low-end device, from Alcatel’s experience with prototypes.

“It is the case. It was not a few months ago. There is a big advantage which is the memory footprint. This OS is meant to run with rather low memory, which is not the case in Android. You have far less overhead the day you switch on your device. Android is fantastic but in some countries, the day you switch it on you download a size of apps and services which obviously has a toll on the memory footprint, on the processing capability. That’s less the case on Windows Phone.

“I think they have been doing a pretty good job on eye-candy, on the UI, where even with a low GPU you can have elasticity features, and all that. So there are some benefits.

“So you can ask, if you are telling me this is so good, why haven’t you been shipping Windows Phone 8 for a year and a half?” said Dery. Apparently the company’s researchers have been uncertain whether the success of entry-level Windows Phones is because of the OS, or because of the Nokia brand. The company seems to have experimented with ideas or prototypes, but “each time we came up with a solution, and each time we have been told, maybe this works because it is Nokia. That is still today the big question mark. Is Windows Phone working in entry [level], is it Nokia with decent smartphones in entry making it happen? Nobody has the answer to that question.”

Dery is convinced that Microsoft’s appeal is for the mass market, not at the high end. “In essence it is a mass market thing. Playing it super high end, was more challenging,” he says.

Note that pre-announced plans can change. We should learn more soon.