Why did Microsoft call the Windows release after 8 version 10 rather than 9?

Windows boss Terry Myerson said it was because it was such a huge release – but then he would say that.

A more prosaic reason could be the old software problem of false version detection. After all, we have had Windows 9x before – that is, Windows 95 and Windows 98. 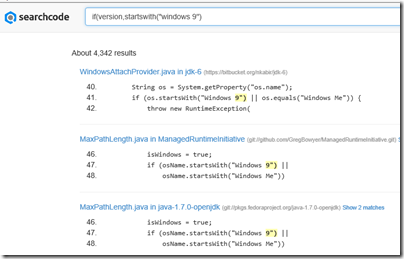 The first of these throws an exception if the name of the OS starts with “Windows 9”; and there are plenty of others like it.

Now, Windows version numbers are complex (Windows 95 actually reported itself as version 4.0) and well-written applications would get this right. There is also a year or so before Windows 10 is released, which gives time for developers, and the suppliers of runtimes like Java, to fix their code if necessary.

Still, it seems to me plausible that avoiding a version headache was a factor behind the naming of Windows 10.