I’ve successfully installed the new BBC iPlayer AIR application on Windows, Mac and Linux – and I’m mostly impressed so far. The main snag is that you have to click the Labs tester button on a separate page before the  download works – but this isn’t mentioned on the download page. Another usability issue is that when you start up the app it invites you start downloading; you click the link, and the iPlayer web site opens in your default browser with no advice on what to do next. You have to find a programme which includes a download to computer link – most of them do not. I found a Roy Orbison documentary that worked (no, that’s not Roy Orbison in the pic, but another singer). 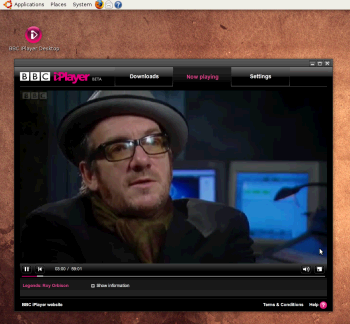 This was a better experience than early days with the old download iPlayer, though on Linux (Ubuntu Intrepid Ibex) I found that I needed to fiddle with the settings and allocate some disk space specifically before it would accept downloads.

An interesting aspect of the new iPlayer is that it replaces a peer-to-peer download system with a direct download. I discussed the implications of this at some length with both Anthony Rose at the BBC, and with a couple of ISPs, when I was researching an interview for the Guardian. In the end there wasn’t enough space to include much of this technical detail, though I’m hoping to post some of it in the near future.

A quick summary: the ISPs are not in favour of peer-to-peer because it is less efficient. Typically, all the retries cause approximately double the amount of data to be transferred (according to my source). That said, they don’t like the BBCs move towards Level 3 rather than Akamai, because it works out more expensive for them. ISPs could install their own box to stream the BBCs content, saving them operational money, but these apparently are expensive to buy and install; I was told that the iPlayer’s traffic does not yet justify it, but if it grows to say twice what it is now, it will become economic.

The biggest cost though is the last step, from the ISP to the user. This is where the cable companies (mostly Virgin Media) have a big advantage, since the cable goes to your doorstep, and is designed to accommodate digital broardcasts. ISPs that have taken advantage of local loop unbundling are also relatively well placed. Those that pay BT wholesale for the traffic are the most vulnerable.

The other important point is that there is always something you can do to manage increased traffic – though not necessarily quickly. If everyone in the UK suddenly tries to watch HD video at the same time, the system will seize up, but that won’t happen. What will happen is that increasing numbers of people will find that their cheap transfer-limited packages are no longer sufficient and they will need to upgrade.