There are various reasons why someone might be impressed with the performance of the Windows 7 beta. One is that the beta is a clean, plain Microsoft install – no anti-virus, no cruft and clutter, no OEM foistware. The only fair comparison is with an equally clean install of Windows XP or Vista on the same hardware.

That can be arduous to arrange, but I was given an opportunity perforce. I installed Windows 7 beta 1 on a laptop using an old hard drive, from which I upgraded last year. I have a second hard drive bay in this laptop, making it particularly suitable for multi-boot. However, in order to install Windows 7 I wanted to boot from CD, which means removing the hard drive bay, so I took out the main internal drive temporarily and replaced it with a spare drive for Windows 7.

Everything went fine until I replaced the old drive. I’m still not sure exactly what went wrong; suspects include the storage controller BIOS possibly detecting the drive as RAID rather than JBOD, or vice versa, or a resume failure. The outcome though was a thoroughly scrambled Vista installation – file corruption and then refusal to boot – that “missing winload.exe” message.

This was going nowhere so I reformatted the drive and did a clean Vista install (with SP1). It struck me that this gave me a good opportunity to run PassMark on the two relatively clean systems (just Office 2007 is installed, on both). Note that you are not meant to publish benchmarks for beta versions of Windows, so treat this as for anecdotal interest only. I am not going to give the exact figures.

The test was not quite fair, since the newer hard drive is faster than the old one, and the graphics driver is a different version. The drive difference probably accounts for why overall Windows 7 result was slightly below that for Vista – the “disk mark” was over 40% worse. Windows 7 was also slightly worse for 2D and 3D graphics, by 5-10%. The result was not all bad for the beta though. The CPU score was around 4.5% better, and the memory score was over 9% better. On the memory allocation tests Windows 7 came out nearly 25% faster.

One final observation: performance is not just about raw speed in tests. I believe some of the most annoying Windows slow-downs are to do with synchronous API calls that time-out before they return, or inefficient Windows utilities. I hate seeing the progress bar that Explorer shows sometimes, when trying to enumerate files in the current directory. If Microsoft simply manages to speed up Explorer and reduce the number of mysterious Windows pauses, users might perceive Windows 7 as faster even if benchmark tests showed otherwise. Some of the changes in Vista since its first release have improved performance by addressing specific defects. Zip extraction and file copying are examples.

Talking of file copying, I can’t resist posting this Vista dialog which I saw when copying a CD image to my new laptop install (note the time remaining). Fortunately for me, it was pessimistic, and the copy completed a few minutes later. 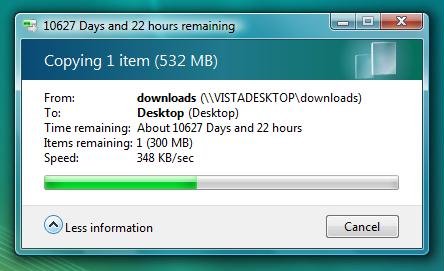