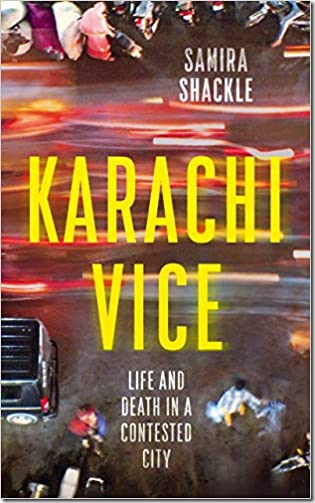 Karachi is the largest city in Pakistan (though not its capital) and among the largest cities in the world. It is also a troubled city; and Karachi Vice tells a bit of its story through accounts of the lives of five people. Safdar is an ambulance driver for a charity called Edhi; Parveen a resident and activist from Lyari, a densely populated area fought over by rival gangs ; Siraj a map researcher whose research into water resources make him vulnerable to attack by those with, um, business interest in controlling water supplies; Jannat a woman from a village near Karachi who tells of its near-destruction because of illegal land possession by a private developer; and Zille a crime reporter who lives for the thrill of real-time reporting on notable incidents. Some names have been changed.

The book is astonishing and has the feel of authenticity since it is based on the actual experiences of these people. It is also something of a dark book, as you would expect from the title. It is a somewhat disjointed read, particularly in the first half of the book, since the various stories are interspersed; you read a chapter on one, then on another, than back to the first, and so on. There is a common thread though, and it all begins to make sense when you go back to re-read the prologue, having finished the rest of the book. There we find a timeline of major events as well as the background. Karachi, Shackle explains, “has been home to a series of complex and ever-evolving conflicts, with sectarian and ethnic resentment mingling with politics and organized crime.” The author concludes that “this is the front line of global urbanization at its most unforgiving.” It is important for all sorts of reasons, demonstrating the human cost of corruption and sectarian conflict.

The tone is measured and matter of fact though you cannot read it without feeling angry at times. One incident that I found particularly stirred my emotion was the account of the 2012 Baldia Town fire, a fire in a textile factory where “all but one exit had been locked by bosses who did not want the workers to take breaks or steal the products … anyone who made it to the front gate of the compound found it locked too.” Many lives were lost.

Karachi Vice has been a long time coming. Author Samira Shackle is a freelance journalist and editor of the New Hamanist, a rationalist quarterly. Shackle is based in London but her mother is a Karachiite. Shackle lived there between 2012 and 2013, a tumultuous period ahead of the Karachi Operation, an effort to stem the violence and crime and one that had considerable success. Shackle was also in Karachi following police patrols in 2015 and 2016 and has first-hand knowledge of incidents like those she describes. In 2018 she won a book prize enabling her to get the book deal that has enabled publication. Parts of the book have been previewed in the Guardian as long ago as 2015.

While I highly recommend Karachi Vice for anyone with an interest in world affairs, I do not find the approach of the book entirely to my taste. I preferred the Guardian pieces where the main subjects are referred to by surname rather than forename; I could have done with a bit more background; the jumping around between subjects makes things hard to follow at times.

None of that matters. Shackles tells real stories from people who get too little attention; the book is gripping, sad but also in a way inspiring, thanks to those moments when courage, love and human decency shine despite dark times.