I was impressed with the integration between XP Mode virtual applications and native Windows 7, as I explained in this review. I’d suggest though that Microsoft needs to do better in distinguishing dialogs that come from virtual XP from dialogs displayed by native Windows 7. This may seem perverse – integration is about disguising the difference, not accentuating it. But let me give you an example of where this is a problem. I started Access 2000 as a virtual application, which worked fine, and behind the scenes Virtual XP kicked into life. Then I saw this dialog on the Windows 7 desktop: 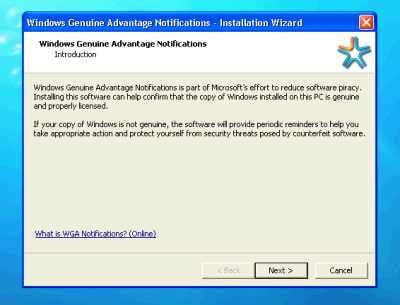 This dialog does not mention Windows XP. It just says Windows. How am I to know that it relates to a virtual instance of XP, and not to Windows 7 itself? Well, if I am awake I might spot that the window close gadget is XP-style, and not the Windows 7 style which is wider and with a smaller X. I am sure that is too subtle for many users.

Here is another example:

In this case, Windows 7 has popped up a notification saying my computer might be at risk, on the arguably dubious grounds that no antivirus software is installed. The balloon has (Remote) in brackets. So what does that mean? Actually, it means the virtual instance of XP, but the word Remote is not a clear way of saying so.

If I click the balloon, I get the XP security center, with no indication that it relates to virtual XP rather than to Windows 7 directly.

I’d like to see more clarity, even if it makes integration a tiny bit less seamless.