I’ve been trying Microsoft Vine. I’m not in the US so strictly outside the area of beta coverage; but the application seems to work fine.

What is Vine? It’s hard to position it, since parts of the UI suggest that it is mainly intended for communication in disasters. You install the application, set up contacts, and you can then send alerts concerning your well-being and report on “situations”. A Live Maps mash-up lets you see alerts in your local area; I’m imagining “the fire has not yet reached this part of the city”. 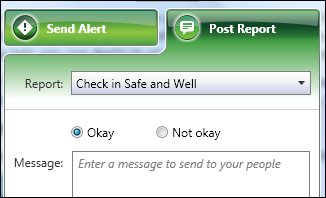 I find the disaster idea a bit fanciful. The world is crashing down around me, so I boot up Windows XP or Vista – the only supported operating systems so far, though Microsoft says it will add other platforms – as do all my contacts, and start interacting with Vine?

Then again, perhaps this isn’t mainly for disasters. The alerts you can show on the map include Politics, Business, Sports and Entertainment. The Post Report drop-down includes “Looking for music” as an option. Maybe Microsoft is trying to compete with Twitter after all?

Third possibility: it is a prototype, a mash-up example to promote Microsoft’s Live services, on which it depends? In that respect, it is somewhat interesting. Yet the application looks polished, and has a fully-fledged beta program; it looks like this is something Microsoft cares about and wants to promote.

There’s a blog post from the team which aims to clarify Vine’s positioning:

Microsoft Vine is not just another Social Network site or tool. It provides a way to keep track of places you care about, your friends and family and ask for and receive help. We aren’t going to compete with these other tools and we sure don’t think of ourselves as Twitter on Steroids.

Sorry, I still don’t understand. It is as if your mobile provider offered you a second phone, specially tailored for use in emergencies, but which you could use it at other times as well. But you are never going to carry two around, just in case. The provider should add the emergency features to all its phones.

So why doesn’t Microsoft just add a couple of features to Live Messenger, instead of messing around with a new client? Further, if Microsoft really wants to help in emergencies, its client should be supremely lightweight and cross-platform, the service should be one any client can easily call on, and it should be doing this in concert with all the main telecom providers, device manufacturers, and social networks. If this is a problem that needs solving, that might yield useful results.

Then again, maybe the disaster stuff is not the real purpose of Vine; maybe that is a kind of emotional marketing to get us to use it.

Personally I am allergic to applications that want to run constantly in the background and occupy a space in the notification area. Vine has to be obviously and immediately useful to warrant it; and right now I’m not getting it.

In a real emergency, I will pick up my mobile, use SMS, turn on the radio, and possibly even consult Twitter – but only because I use Twitter all the time anyway. 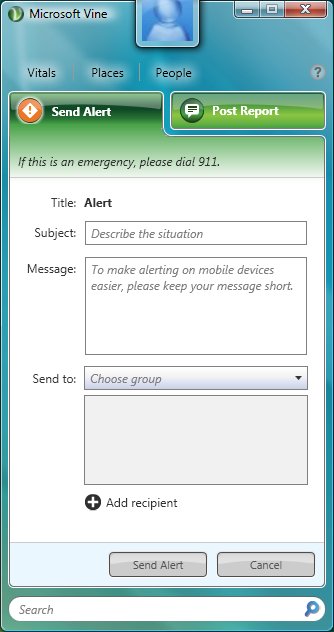