I reviewed Firefox 3.5 for The Register. I found the new features unexciting from a user perspective, but not so for developers. The new TraceMonkey JavaScript engine, improvements to the Canvas element, JavaScript threading and various bits of HTML 5.0 make this a more powerful platform for web applications – provided that you workaround the problem of users with Internet Explorer. The arrival of video and audio elements is also worth highlighting: 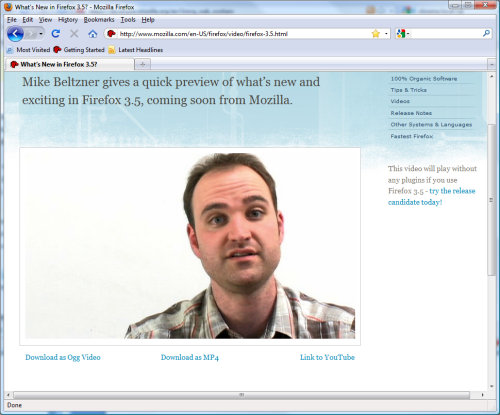 Another new feature is SVG effects for HTML, including masking, filtering and clipping. The point I made in the review is that this is a shot at Adobe as well as Microsoft. Although it is a long way from a viable alternative to Flash for now, the direction is clear.

That does not mean it will succeed. On the other hand, if Apple, Google and Mozilla pull together in making browser standards rich enough not to need plug-ins for most of the scenarios where Flash is used today, this could disrupt Flash momentum.

What about IE? That’s the big question. Here’s a few questions:

1. Will Microsoft implement these standards or hold back, arguing that Silverlight makes them unnecessary?

2. Will IE retain its market dominance – still over 65% last time I looked, even though it is losing among developers and influencers?

3. Could IE add-ons along the lines of Screaming Monkey for JavaScript and the Mozilla Canvas plug-in that has been discussed pull IE along anyway?

This article by Ryan Paul from last year discusses the issue. He says, why shouldn’t Adobe embrace HTML 5.0 rather than fighting it:

Although Canvas arguably competes with Adobe’s Flash plugin in a certain set of use cases, it’s worth noting that Adobe doesn’t generate revenue from the Flash plugin itself. Adobe cashes in on Flash by selling its powerful authoring tools, which the company could easily extend to support standards-based web technologies.

It’s a fair point; but given the commercial advantages of owning the platform, as opposed to being just another tools vendor, I doubt Adobe would make this shift unless it saw no realistic alternative. Even fully open-sourcing the Flash runtime would be less risky.

You can find Firefox here, and the developer features are described here.

15 thoughts on “Mozilla takes aim at Flash and Silverlight with Firefox 3.5”