The main problem I have with Windows Live is lack of confidence that it will actually work as advertised. There is a rational explanation for this kind of hunch. It is formed from previous experiences, and once formed, it hard to shake off.

Here’s what happened today. I wanted to contact a Microsoft blogger who hosts his blog on http://spaces.live.com. I couldn’t see an email address (understandably), so I clicked on the button that said Send a message. I was prompted to sign into Windows Live, which I did, and then after a bit of screen flashing and approving of ActiveX controls I had a form into which I could type.

I typed the message. Then I did something which reflects my lack of confidence: I copied the message to the clipboard, in case something went wrong and I had to type it again. Finally, I clicked Send. This is what I got: 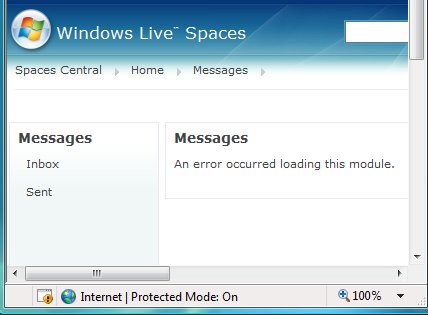 Note that all my text was zapped. I closed the browser, restarted it, signed in again, returned to the message form, pasted in my text, and clicked Send again. Same result.

I’d noticed during the process that this messaging system has some relationship with Live Messenger. I figured therefore that upgrading Messenger to the latest version might help, especially since Messenger nags me on this subject whenever I start it up. So I fired up Messenger and allowed it to update itself. During the install I got this dialog: 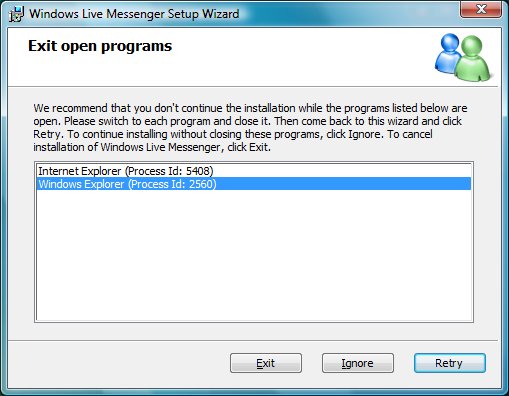 Frankly, I will not take anything Microsoft says about user experience seriously until the company stops inflicting this kind of dialog on its users. Look at it. It recommends that I close some open programs, but does not say what the consequences will be if I do not. It is a vague threat that something might not work right. But that’s not all. Internet Explorer was not visibly open at the time. I had to go into Task Manager and end the process. Many users would not make it that far.

It gets worse. I’m being asked to close Windows Explorer. This is the application that forms the Windows desktop. If you close it, you lose the Start menu, taskbar, desktop icons, pretty much everything except the background.

Still, I didn’t want to risk a bad install. I went into Task Manager and ended the explorer.exe process. No more desktop. Then I continued the Messenger setup. It went through fine (except that no, I don’t want msn.com as my home page, but thanks for asking). Finally, I restarted Explorer. Task Manager – New Task – type Explorer – hit Enter. Yes, I’ve been here before. Zing! back comes my desktop.

Back to Live Spaces, paste in message, click send, and … you’ve guessed it.  “An error occurred loading this module”. Never mind.