Update: this post is based on obsolete beta code. Please go to the updated version here.

When I read Patrick Aljord’s blog on how to create Chrome Apps I thought, “that looks easy”. So I installed the dev channel version of Chrome as advised here, though on a VM just to be safe, and set about creating my own.

Well, WordPress is a web application; so my example is this blog. I created a manifest in Notepad. 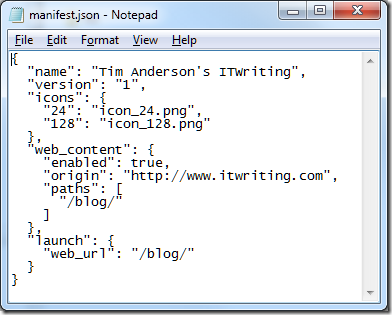 I ran the dev. build of Chrome using the –enable-apps switch. On the Extensions tab there are tools for building a .crx, which is the container for a Chrome Web App. I built the app, then installed it.

You get a generic warning about the extension. I was surprised not to see a stronger complaint about my app having no authenticated signature – it could be from anywhere. I guess this may be changed for the final release.

After installing, the app appears in the Chrome New Tab page. 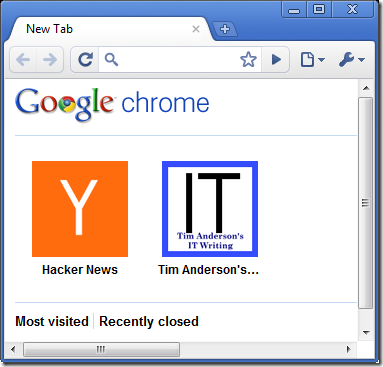 You can try my web app here.

The whole process is very simple, which I like. It is also almost the same thing as a bookmark or favourite link. The main differences that I can see:

Incidentally, if you try installing an app into the current standard build of Chrome, it installs as an extension but does not do anything. I also had to omit the “permissions” section of the manifest, otherwise I got an invalid permissions error when installing. In the developer build all was fine.

I tried dragging my app from Chrome to the desktop to make a shortcut. It worked, but simply created a standard web shortcut, which opens in your default browser, not necessarily in Chrome.

It is all so easy that it will make sense for almost anyone to create a Chrome Web App from their web property. Which also means there will be plenty of junk web apps around.

I’m not clear exactly how the Web Store will work. While I would love to sell URLs for money, they are not inherently of any value, though a serverless app is different. Presumably the normal thing would be to sell some sort of subscription, which implies registration and user authentication. No doubt everything will work smoothly if you use a Google ID as your authentication provider, though I hope Google will also provide for alternative systems.