I was glad to see and hear the French Devialet Phantom system at the Mobile Focus event in Barcelona, just before Mobile World Congress, having missed the company’s recent presentation in London. 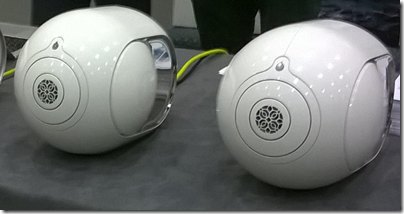 My encounter with Phantom did not get off to a good start. I am allergic to misleading jargon, and the pitch the Davialet representative made to me was confusing to say the least. “Digital chops up the sound,” he told me; but with hybrid technology Devialet was able to reproduce the purity of analogue sound. I observed that every DAC in the world is able to decode digital formats to analogue sound, and we had some difficulty progressing to what exactly is different about Devialet’s approach.

The case for the Phantom is not helped by the over-the-top language in the brochure, which modestly claims “the best sound in the world” and under a heading “IN TECHNICAL TERMS” promises Zero distortion, Zero background noise and Zero  impedance.

The system was playing Hotel California by the Eagles when I was there. I know the sound of this album well and it sounded boomy and unpleasant, though it is difficult to get good sound on a stand in a busy exhibition so I make generous allowance for that.

I did get a copy of a white paper which offers a bit more information. There are several technologies involved.

A Texas Instruments PCM179x DAC is positioned next to the amplifier to minimise any loss between the two.

Next comes SAM (Speaker Active Matching) which processes the audio to compensate for the characteristics of the drive units. This “takes place ahead of the DAC and power amplifier section” according to the paper, so you could think of it as a kind of digital pre-amplifier. SAM has “a mathematical model of the complete drive unit, accounting for the electrical, mechanical and acoustical behaviour.”

A third feature has the name HBI (Heart Bass Implosion). This tackles the tricky problem of reproducing deep bass with a small enclosure. The idea is to use a sealed box design for high efficiency at the lowest frequencies, a driver with long 26mm excursion (the difference between the foremost and backmost position of the driver) in order to move more air, and to use two symmetric drivers to cancel mechanical vibrations.

This does result in high maximum air pressure inside the enclosure, up to 174dB SPL according to Devialet’s paper. Most drivers collapsed in this environment, so Devialiet designed its own woofer.

Finally Devialet’s engineers figured that a sphere is the ideal shape for producing sound without “diffraction loss”.

The problem with such measurements is that they typically taken in an anechoic chamber whereas actual listening rooms have all sorts of resonances that result in a much less accurate sound.

Does Devialet’s Phantom system sound as good as a more traditional system at its price level? That is the question which interests me; if I get an opportunity to try it out I will be sure to report back.