Yesterday Google announced the availability of the first commercial Chromebook, a Linux computer running the Chrome browser and not much else. There are machines from Acer and Samsung which are traditional laptop/netbook clamshell designs, with an Intel Atom dual core processor, 16GB solid state storage, and a 12.1” screen. Price will be a bit less than $400, or organisations can subscribe from $28 or €21 per month in which case they get full support and hardware replacement. There are wi-fi and 3G options. Nobody is going to be excited about the hardware. 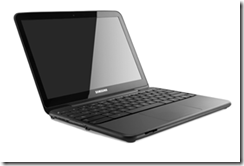 The Chromebook may be the most secure computer available, if Google has got it right. The OS is inaccessible to the user and protected from the browser, and system patching is automatic.

The strength and weakness of the Chromebook is that is only runs web applications – the only exception being utilities that Google itself supplies. Are we ready for a computer that is little use offline? I am not sure; but this will be an interesting experiment.

The Chromebook is a compelling alternative to a traditional PC with its susceptibility to malware and dependence on locally installed applications and data. If you lose your PC, getting a new one up and running can be a considerable hassle, though large businesses have almost cracked the problem with system images and standard builds. Lose a Chromebook, and you just get another one and sign in.

You sign into Google of course, and that is a worry if you would rather not be dependent on a single corporation for your digital identity and a large chunk of your data.

The problem for the Chromebook is that Apple’s iPad and numerous Google Android tablets and netbooks offer security that is nearly as good, and local applications as well as web applications, for a not dissimilar cost. These devices are also easy to restore if they break or go missing, slightly less so than a Chromebook but not much.

Put like that, it is difficult to see the advantage of the Chromebook. The subscription scheme is interesting though; it is a new business computing model that brings the cloud computing principle of operating expenditure instead of capital expenditure to the desktop.

The offline issue may be the worst thing about a Chromebook. When I travel, I frequently find myself without a good internet connection. The word “offline” does not feature in either the consumer or business frequently asked questions – a question Google would rather you did not ask?

Yet there is 16GB storage on board. That is a lot. In theory, HTML 5 local storage should solve the offline problem, but few web apps, including Google’s own, make this seamless yet.

A few other observations. While there are no user-installable client apps, Google is adding some utilities.

We’ve heard from our pilot customers that VPN is an important feature for businesses and schools, and we’re working very hard to bake this into Chromebooks soon. Support for some VPN implementation is already in the product and we’ll both extend support for more VPNs and get these features to stable soon.

we are developing a free service called Chromoting that will enable Chrome notebook users to remotely access their existing PCs and Macs.

Apparently this is based on Citrix Receiver.

There is a bias towards Adobe Flash:

Chromebooks have Flash support built-in, but they do not support Java or Silverlight.

Another blow for Java on the client.

2 thoughts on “Chromebook: web applications put to the test, and by the way no Java”