Microsoft’s Windows President Steven Sinofsky has shown off an early build of Windows 8 at the D9 conference in Rancho Palos Verdes, California. It turns out that the not-so subliminal messaging at the PDC conference late in 2010 was spot on. HTML 5 and JavaScript are at the centre of the new Windows, for apps as well as in the browser:

Windows 8 apps use the power of HTML5, tapping into the native capabilities of Windows using standard JavaScript and HTML to deliver new kinds of experiences.

So what is the new Windows like? Here is tour with some screen grabs from the above video. I have deliberately included fingers in several of the shots, because the new Windows is touch-centric.

First, Windows 8 borrows from Windows Phone and has a Start screen built with Live tiles: 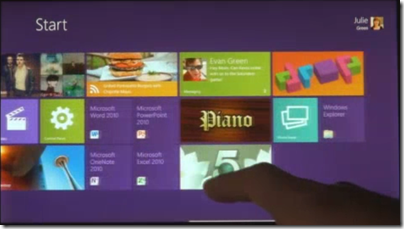 Live tiles, as on Windows Phone, are more than just icons; they can include notifications, video and animations. They are more like app previews. 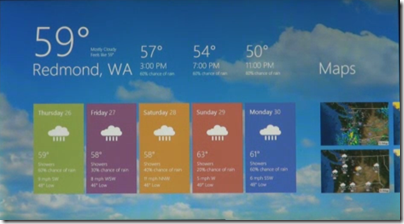 You switch apps by swiping. Here is a screen caught mid-swipe: 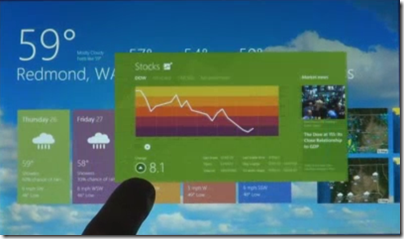 However, you can also have two apps on screen. One is the main app, the other is docked to the side: 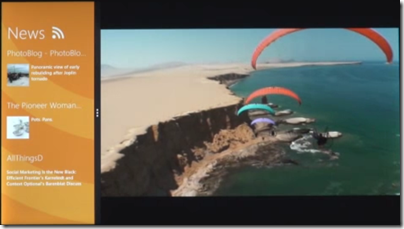 A menu on the right shows Search, Share. Start. Connect and Settings. I am not sure what Connect does. 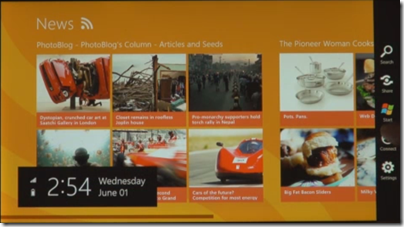 Believe it or not, this is Internet Explorer 10, with tabs along the top that preview each page (nice idea): 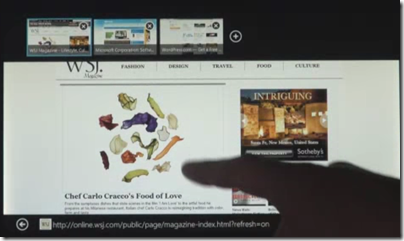 The on-screen keyboard looks like a big phone keyboard: 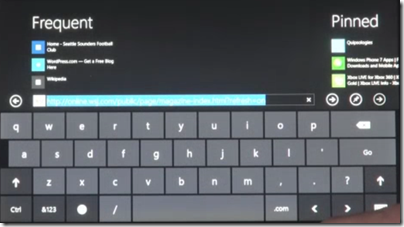 So where is the rest of Windows that we know and love/hate? It is still there; run an “old” Windows app like Excel and presto, it is Windows 7, complete with task bar. This image looks blurry, which actually is a clue to how big and bold the UI shown for the “new” apps really is: 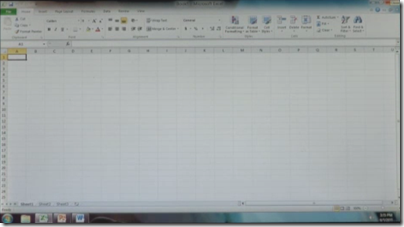 You can run old and new-style apps side by side, using the main/side app model: 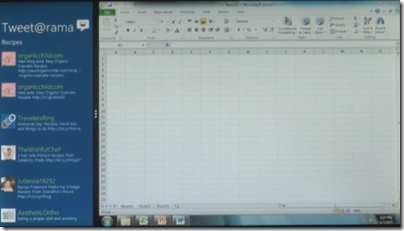 Windows 8 will run on both Intel x86/x64 processors, and on ARM. Legacy app compatibility on Intel will be great, but on ARM applications will need to be recompiled. There is no x86 emulation layer; Sinofsky said that was too difficult to do. Windows 8 will not require any more hardware than Windows 7.

It looks like Microsoft has created an excellent tablet/slate UI which has the same relation to the iPad that Windows Phone 7 has to the iPhone. It borrows many of the ideas but adds some distinctive features.

The big difference: whereas Apple has chosen to continue a dual line, with desktop/laptop Mac in one stream and iOS for iPhone and iPad in another, Microsoft is combining the two.

At least, it is in Windows 8. What about the current Windows Phone OS, which is built on the Windows CE OS? Will it be replaced by a variant of Windows 8, possibly with “full Windows” option disabled? That is my guess, but there is a lot which Microsoft has not yet explained about its future product plans.

Another question: where is Silverlight and .NET? Clearly these technologies are still supported, at least on x86, since all of Windows is still there. In a report from D9, Sinofsky says:

That does not answer the question: can developers build apps for the new Windows user interface (and Windows store) using Silverlight, or is it HTML/JavaScript only? What about native code?

I will be surprised if all these options are not available, but it was not explicitly stated at D9. The emphasis is firmly on HTML.

We are promised more details at the BUILD conference in September.

3 thoughts on “Check out these images of Windows 8 – but where is Silverlight?”