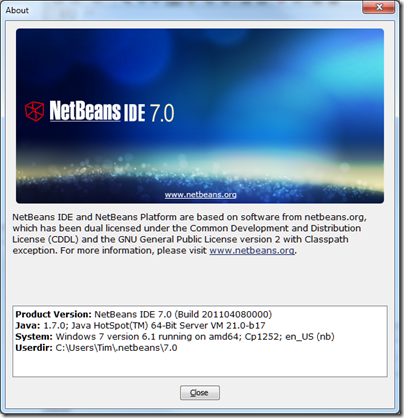 What’s in Java SE 7? Despite the full version number increment, I am tempted to call this an interim release. In December 2010 the JCP approved the specification of both Java SE 7 and Java SE 8, with two of the more interesting features, Project Lambda and the Module system (Project Jigsaw), held back for Java SE 8. Java SE 7 does include the InvokeDynamic keyword which improves the performance of dynamic languages such as Ruby and Python running on the JVM, as well as most of the minor language enhancements known as “Project Coin”. There is also a Fork/Join framework to better support concurrent programming.

The good news is that Java SE 8 is set to follow in late 2012, not so long considering Java SE 6 was released in 2006 . You can see the roadmap summarised here. This post is from October 2010, but as far as I am aware it has not changed much since. 2012 is also when we can expect Java Enterprise Edition 7.

It is also worth mentioning JavaFX 2.0, set for release later this year. A handy summary of JavaFX 2.0 is here. Whereas JavaFX 1.0 was rushed out and features a new scripting language that in the end few wanted, JavaFX 2.0 is more promising. Dimitry Jemerov, developer of IntelliJ IDEA at JetBrains, told me earlier this year:

JavaFX is going to turn, when the version 2.0 is released, from a dead end resource sucker project into a set of distinct technologies of great immediate usefulness to many Java developers.

Is there still hope for Java on the client? Java is barred from Apple iOS which is a problem, and is no longer supplied as standard on Mac OS X, but it will still make sense for many business applications. Of course Java is also wildly successful in the context of Google Android, but that uses the Dalvik VM rather than the Java VM so is rather a different thing.

Update: As ever, upgrade critical machines with caution. In particular, Apache Lucene and Apache Solr do not work on Java 7 because of HotSpot optimization bugs.