Adobe has released a preview of Muse, a new web site design tool.

My first reaction was one of be-musement. What is wrong with Dreamweaver, the excellent web design tool included in Creative Suite? Bearing in mind that there is also a simplified Dreamweaver aimed at less technical business users, called Contribute.

Here are some distinctive features of Muse:

1. It is aimed at non-coders. The catch phrase is “Design and publish HTML websites without writing code”. Muse actually hides the code. I installed Muse on a Mac, and one of the first things I looked for was View Source. I cannot find any such feature. You have to preview the page in the browser, and view the source there. That is in contrast to Dreamweaver, where the split view shows you simultaneous HTML and visual designers, and you can edit freely in either.

2. It is an Adobe AIR application. I discovered this in a bad way. It would not install for me on Windows: 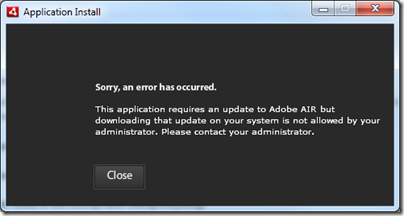 A curious error. Luckily I am also working on a Mac right now, and there it worked fine. 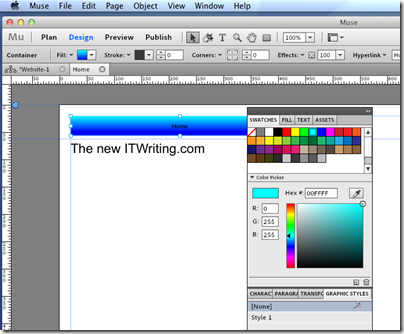 3. It will be sold by subscription only. The FAQ answer is worth quoting in full, as it describes one of the key advantages of cloud computing:

Muse will be sold only by subscription because it will allow the Muse team to improve the product more quickly and be more responsive to your needs. Traditionally Adobe builds up a collection of new features over 12, 18 or 24 months, then makes those changes available as a major upgrade. It is anticipated that new updates of Muse will be released much more frequently, probably quarterly. New features will be made available when they’re ready, not held to be part of an annual or biannual major upgrade. This will enable us to stay on top of browser and device compatibility issues and web design trends, as well as enabling us to respond to feature requests and market changes in a much more timely fashion.

I am reminded of Project Rome, a cancelled project which was also intended to be subscription only. Rome was for desktop publishing, Muse is for web design; otherwise there are plenty of parallels.

4. Muse promotes Adobe hosting via Business Catalyst, and if you select Publish this is the sole option: 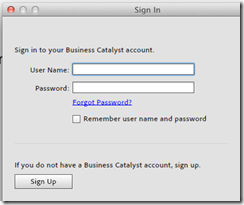 Of course you can also Export as HTML. Still, it looks as if Muse is intended as part of a wider initiative which will include hosting and web analytics.

5. Muse is not a Flash authoring tool. Check out the Features page. The word Flash does not appear. Nor did any hidden Flash content appear when I exported a page as HTML. My guess: there is a quiet Flash crisis at Adobe, and the company is hastening to make its tools less Flash-centric, in favour of something more cloud and HTML 5 based. I do not mean that Flash is now unimportant. It is still critical to Adobe, and after all Muse itself runs on Flash. However it is being repositioned.

A few comments. Unfortunately I’ve not yet spoken to Adobe about Muse, but the obvious question is reflected in my heading: what is wrong with Dreamweaver? To answer my own question, I can see that Dreamweaver is a demanding tool, and that Muse, while still aimed at professionals, should be easier to learn.

On the other hand, I recall many early web design tools that tried to hide the mechanics of web pages, some more successful than others, and that in the end Dreamweaver triumphed partly thanks to its easy access to the code. Some still miss HomeSite, an even more code-centric tool. What has changed now?

Needless to say, Dreamweaver is not going away, but there is clearly overlap between the two tools.

Of course non-coders do need to be involved in web site authoring, but the trend has been towards smart content management tools, such as WordPress or Drupal, which let designers and coders develop themes while making content authoring easy for contributors. Muse is taking a different line.

Watch this space though. Even on the briefest of looks, this is an impressive AIR application, and it will be interesting to see how it fits into Adobe’s evolving business strategy.

Update: Elliot Jay Stocks blogs about the code generated by Muse, which he says is poor, and his opinion that it is too much print-oriented:

warning signs are present in this public beta that suggest Muse is very much a step in the wrong direction.