At Nokia World in London on Wednesday, CEO Stephen Elop presented the new Lumia range of Windows Phones. You can watch the keynote here – I was impressed by Elop’s clarity and conviction, and also by VP Blanca Juti who talked about the Asha range of nearly-smartphone feature phones.

The demonstration of the Windows Phone OS and apps seemed to me weaker and you could sense a struggle in energising the audience. I suspect this is because Windows Phone has already been out for a year and has failed to meet expectations; clearly it takes more than live tiles to make a success of a new Smartphone.

Elop is aware of this which is why he made the following widely quoted remark:

[Lumia is] the first ever instantiation of the windows phone platform that properly embodies, complements and amplifies the design sensibilities of windows phone … more simply stated, Lumia is the first real Windows Phone.

I have yet to handle a Lumia but I believe Elop, in that the other Windows Phone 7 devices are no more than ordinary in their design, whereas Nokia has done something distinctive.

I was impressed by the demo of turn by turn navigation; this does look like an attractive and useful app. 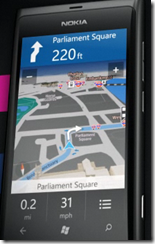 I was also impressed when Elop talked about the marketing effort which Nokia and its retail partners are putting behind Lumia. He said that there are 31 operators and retailers in size countries which:

He added that Nokia will be distributing seed devices widely among retailers so that they really know (and, Elop claims, love) the Lumia Windows Phones.

My immediate reflection is that Microsoft needed Nokia a year ago; Windows Phone has never before received this kind of backing. I am not sure that I have ever seen a Windows Phone for sale in my local small town centre, which has several mobile phone shops.

The tough question: is the OS good enough to compete with Apple and Android? I think it is a reasonable alternative, though I personally find the 20 beautifully designed icons I see on the first screen of the iPhone 4 more appealing than the seven chunky, flickering tiles I see on a Windows Phone. That said, I can see that the Windows Phone makes a good Facebook phone. I also like the Office apps and their read-write support for SharePoint, which is useful to me as a SharePoint user.

Where Windows Phone falls short is in the quality and availability of apps. There may be 30,000 in the Marketplace, but most of them are rubbish, and if you have a niche interest it is less likely to be represented than on an iPhone. I play Bridge, and on the iPhone I can enjoy FunBridge among others; on Windows Phone, nothing yet.

I have also found the data in Local Scout, a location-based index of places to see, shop or eat, too poor to be of much use where I am, though it may be better in London or other big cities.

If Nokia can win significant market share through its new range, problems like these will solve themselves as more people will care about them, and more apps will be developed.

It does need early success though, and this will not be easy bearing in mind that the general public are not really discontented with what is already on offer from others.

Nokia seems to have the right marketing ideas though, and the prices look reasonable. Watch this space.