Google’s Executive Chairman Eric Schmidt addressed the Mobile World Congress in Barcelona in confident mood, boasting of the strong growth in Android adoption and saying that the world would need to increase its population in order to sustain current rates of growth. 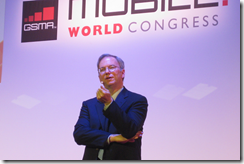 His keynote was in three parts. He kicked off with a plug for Chrome for Android, handing over to another Googler to show off its unlimited tabs and predictive background downloading which gives you near-instant page rendering if you pick the top hit after a Google search.

Next, he gave a somewhat political address appealing for light regulation of the Internet, on the grounds that any change to the current setup was likely to make it worse – “regulators regulate, that is what they do”. He also expressed his hope that fast internet access would be better extended to the world beyond the wealthy elite nations, noting the role of connectivity in the Arab Spring and in making public the actions of brutal dictators.

What has all this to do with Google’s business? Mainly, I suppose, that more connections means more Google searches which means more advertising income; Schmidt acknowledged that this forms the great majority of the company’s revenue, in the high nineties percentage-wise.

The third part of Schmidt’s session was the most interesting, when he took questions. He was asked for his thoughts on companies (I am sure Amazon was in the questioner’s mind) which take Android and remove all Google’s services. It is open source, he said, and that is entirely permissible; his hope is that customers will demand Google services and the Android market.

There was a revealing moment when an Iranian in the audience challenged Schmidt over his appeal for a free Internet. Chrome for Android was not available in Iran, he said, because Google, “your company”, is blocking it.

Schmidt immediately communicated with his legal team, who turned out to be sitting in the front row. Then he confirmed the block and said it was a requirement of US law, because of sanctions against Iran. “I’m with you”, he said, but Google has to comply with the law.

Another point of note was the number of references Schmidt made to privacy issues. He said that we will see increasing personalization of search and better targeted advertising, such that users will not mind it. You will be able to opt out, but according to Schmidt you will not want to. He added that personal data collection and use will continue to advance as far as society deems it ethical, a fascinating turn of phrase and one that bears further examination.

What was not mentioned? Apple, Microsoft, patents, the impact of the Motorola Mobility acquisition (he did say that that this last is not yet complete and that currently the company is managed independently).

It was an impressive keynote overall, given from a position of strength, at an event which is dominated in many respects by Android devices.