I attended the London BlackBerry Jam, one of around 500 developers (the event was sold out) who showed up to learn about developing for Blackberry 10 and in the hope of snagging a prototype of RIM’s next smartphone, the BlackBerry 10 Dev Alpha. The event is part of a tour of 26 cities worldwide. I also spoke to Vivek Bhardwaj, Head of Software Portfolio EMEA for RIM. Does BlackBerry 10 have what it takes to  compete against Apple iPhone and Google Android?

A few quick observations. The event was split into native and web tracks, with the native track focusing on  C/C++ development and the Cascades UI framework, and the web track covering WebWorks, the HTML 5 developer tools which you can use to target mobiles as far back as BlackBerry 5, or to create apps that share code between BlackBerry and other mobile platforms.

There was also a tour of various mobile JavaScript libraries. One that caught my attention was Zepto.js, which implements most of the jQuery API in just 8.4k of compressed code, around 25% of the size of jQuery. The trade-off, aside from some missing features, is lack of support for Internet Explorer, though support for IE 10 is under consideration. Thought-provoking: the price of legacy platforms?

It turned out that the device Bhardwaj was holding, though pretty much the same hardware as the Dev Alpha giveaway, was more revealing as a glimpse of the next-generation BlackBerry. The Dev Alpha, which has an impressive 1280 x 768 screen, comes with no applications other than the web browser and its user interface is pretty much that of the PlayBook. Bhardwaj’s demo device on the other hand is a complete early version of BlackBerry 10 though there were parts that he would not demonstrate. I went to compose an email and he said, “we are not ready to show that yet.” 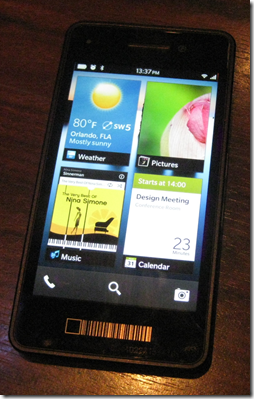 So what is distinctive about BlackBerry 10? One of its key features is multitasking, thanks to the processor scheduling capabilities of QNX, the embedded operating system which underlies both PlayBook and BlackBerry 10. According to Bhardwaj, this enables up to 8 apps to run at once. “Applications all run simultaneously. We don’t need to pause them,” he said. “It’s much more about flow.”

Although apps do run full screen, you can take advantage of the multitasking by “peeking” at a background app. This means holding your finger towards the corner of an app and dragging it left to see a little of what is underneath. In the pic below this is another image. 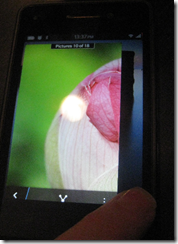 Talking to developers at the event I picked up considerable enthusiasm for BlackBerry 10, though compatibility is a headache. If your customer asks you to support all versions of BlackBerry back to the 5.0 series, you are stuck with WebWorks and the pre-WebKit browser in 5.0. If you can convince your customer to forget 5.0, then you can develop for WebKit. If you want to use Cascades then you are restricted to PlayBook and BlackBerry 10.

The prototype BlackBerry 10 phone looks good, but as a brand new platform is it sufficiently exciting to revive RIM’s fortunes? “I don’t believe that in a trillion-dollar plus industry there can only be two players. I think there is more than enough space for four or five platforms. It’s very short-sighted if we think there can only be three ecosystems,” said Bhardwaj.