I watched the Windows Runtime (WinRT) “Ask the Experts” session from Build 2012; I did not get to attend in person as it conflicted with Herb Sutter’s session on C++. The session was chaired by Martyn Lovell. 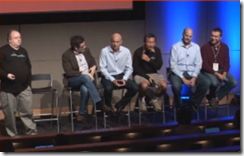 Here is what I thought most significant or interesting.

Watch the session yourself here.