Microsoft has announced that Windows chief Steven Sinofsky is leaving the company:

Microsoft Corp. today announced that Windows and Windows Live President Steven Sinofsky will be leaving the company and that Julie Larson-Green will be promoted to lead all Windows software and hardware engineering. Tami Reller retains her roles as chief financial officer and chief marketing officer and will assume responsibility for the business of Windows. Both executives will report directly to Microsoft CEO Steve Ballmer. 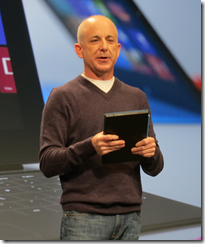 Here are some quick thoughts.

One line of thought is that Windows 8 and Surface RT are failing because users do not like the dramatic changes, with the new tiled personality and disappeared Start menu, and therefore its architect is departing.

I do not believe this for several reasons. One is that the promoted Julie Larson-Green is a key creator and proponent of the new design (call it Metro if you like). She worked with Sinofsky on the Office Ribbon way back, a project that has some parallels with Windows 8: take a critically important product and revamp its user interface in ways that customers are not requesting or expecting.

My further guess is that Microsoft was braced for some level of storm on the release of Windows 8. There was plenty of warning that the new tablet-friendly platform would be a hard sell to longstanding Windows users.

The time to judge the success of Windows 8 is not today, but in two or three years time, when we can observe how the platform is faring in the new world of mobile and cloud.

It is my opinion that the remaking of Windows is more brilliant than blunder. Without “reimagining” it was doomed to slow decline. Microsoft now has a tablet operating system, and one that is in the hands of millions thanks to its integration with desktop Windows. The storm will die down and there is at least some chance that the outcome will be an app platform that will keep the company in the tablet game.

That said, it seems to me that Microsoft has had problems in execution. Windows 8 is fairly solid, but there are signs of haste in the building blocks of Metro, as you discover if you write an application, while Surface RT is not the fast, easy to use appliance that it should be. Key apps like Mail and Xbox Music are short of features and too hard to use, while Windows-isms such as update errors have not been expunged as they should. Such issues can be fixed, but the moment to get this right is at launch, not six months or a year later.

You might also ask: why is Microsoft allowing its brand new store to fill with rubbish apps, seemingly with the knowledge and encouragement of employees at the company?

Were these execution problems Sinofsky’s fault then? Again I doubt that. My perception is that Microsoft is a dysfunctional company to some degree, but one in which there are islands of immense talent and teams which deliver. It is huge and bureaucratic though, and getting everyone motivated and energised to deliver top quality is likely impossible without radical reform. Bureaucracy tends to result in employees who work by the letter not from the heart, which results in mediocrity, and there is evidence of that everywhere.

In this context, the fact that Sinofsky delivered twice, once with Office 2007 and again with Windows 7, with judgment on Windows 8 not yet possible, shows his ability.

If failure is not the reason then, why?

Well, another reason for staff to leave suddenly is that there was some sort of internal conflict. Sinofsky achieved by taking a firm line and sticking to it, which made him enemies. I do not have any inside information; but two moves to reflect on would be the move of ASP.NET and Silverlight guy Scott Guthrie to Windows Azure, and deep Windows internals guy Mark Russinovich also to Azure.

Sinofsky was no friend to .NET, which led to some perplexing decisions. A little sign of this I witnessed at Build was why XNA, a .NET wrapper for Direct X hardware acceleration, is not supported in Windows Phone 8. Except it is, as a member of the phone team explained to me, it is just that you have to target Windows Phone 7 in your project, but it will run fine on Phone 8. Why the workaround? Because .NET is now discouraged for games development, for no technical reason.

Still, this war has been going on for a while and Sinofsky has won every battle. Why has he now left?

I have no inside knowledge, but would conjecture that the effort of forcing through Windows 8 and native code versus .NET built up pressure against him, such that there was instability at the top. In this context, even relatively small failures or falling behind projections can be significant, as resources for opponents to use against you.

CEO Steve Ballmer of course is still in place. Did have a change of heart about Sinofsky, or a row with him over what comes next for Windows? That is the kind of thing which is plausible; and the uncertain market reaction to Windows 8, while not unexpected, would make it possible to push him out.

If I were a shareholder though, the departure of this key executive at this moment would worry me. This is the company which has transformed Windows Azure for the better and delivered the fantastic Windows Server 2012; it is also the company which is guilty of the Kin mobile phone debacle, and forgetting its agreement with the EU to offer a browser ballot to Windows 7 users at perhaps substantial financial cost. Evidence, one would judge, that deep change is needed, but not the kind of change that will be achieved by the departure of one of the most capable executives.

5 thoughts on “Steven Sinofsky leaves Microsoft – but why?”