RIM has announced key dates for developers in the run up to launch on January 30 2013.

Following the release of Microsoft’s Windows Phone 8 this month, RIM’s BlackBerry 10 is next up in the category of smartphone platforms trying not to drown in the Android and iOS tide (more Android than iOS of late).

RIM’s strategy includes an element of “if you can’t beat ‘em, buy ‘em”. The company is offering a $10,000 guarantee to developers who achieve at least $1000 revenue from their BlackBerry 10 app in the first year. 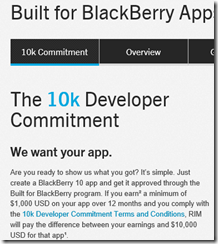 There are terms of conditions, of course, including the performance, design, security and usefulness of the app.

It will be fascinating to see if RIM is successful in this attempt to fill its store at launch with high quality apps – something Microsoft failed to do for the Windows 8 App Store.

The offer is a no-brainer for developers who already intended to make a commercial app for BlackBerry 10. For others it is a nice incentive but perhaps not the easy money that it first appears, presuming no cheating of course. The majority of apps do not achieve even $1000 revenue. Creating an app that is good enough to do so, without that costing so much that the $10,000 loses its significance, is not trivial.