The Windows Runtime, the new touch-friendly platform in Windows 8. It solves many problems. Not only is it tablet-friendly, but apps are sandboxed for security, and easy to deploy. No setup hassles, just one-click (or tap) install or uninstall. It also supports three types of development covering most tastes: native C++, .NET Framework, or HTML and JavaScript. In order to ensure responsive apps, Microsoft made many of the APIs asynchronous, so that users would not have the frustration of a frozen user interface or spinning hourglass during long operations.

At least, that is the theory. When I came to write my own simple app though, I was surprised how fiddly it was, and that something trivial like displaying a tweet including a working hyperlink turned out to involve Run elements, a ContentControl, a converter class and so on. Even then, I could not get the mouse cursor to turn to a hand icon when hovering over the link.

This hands-on experience gives me sympathy with others struggling to implement more complex projects. Some have posted about their experiences. Here is Frank Krueger, who has ported his neat iCircuit electronic circuit simulator from iOS and Android to Windows RT:

You would be shocked to see some of the crazy bits of code I had to put in because the Win8 platform, while very rich, is also very generic and doesn’t help you at all to build standard apps (document based, tools, etc.) That is to say, Cocoa is a very mature platform designed to make apps feature-rich and consistent while also making the developer’s life easy. WinRT on the other hand gives you rectangles and a blog post that says “good luck”.

He lists a number of problems, including having to reboot Windows constantly while testing the Share Charm; having to disable media elements in he app because of 500ms delays, no control over buffer sizes, and playback issues; and graphics issues:

I want to do real-time 2D vector drawing. Direct2D is perfect for this. But WinRT puts all sorts of limitations on onscreen rendering, most notably: you can only have 1 DirectX swap chain (view) per window. That means I can’t use Direct2D for rendering the scope which means the scope is slower than it needs to be. Dear Microsoft, go spend a few minutes and see how beautifully CocoaTouch and OpenGL work together on iOS. You might get inspired.

Next up is Media Monkey, a popular Windows media player which has been ported to the Windows Runtime platform. I was pleased to see this, as it lets me play FLAC music files on Surface RT. It is not very stable yet though, and I have had difficulty getting it to index the collection of FLAC files which I have on a network-connected drive. 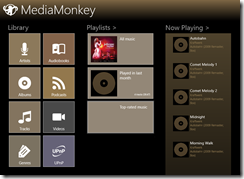 What I found most interesting though were comments about the difficulty of displaying lists beyond a trivial size. One user complained:

When I first started MM scanning my music library, I was seeing the Album list grouped into sections headed up by the Alphabet letters. However, as more Albums got added, the heading letters vanished – and I now have an unbroken list of Albums – a great wodge that is very tiresome to navigate through by scrolling.

to which the Czech developer replied:

It’s a big problem, but not in MediaMonkey, but in system itself. Disabling groups is only crashes prevention because of system limitation

. Because of this we cannot use semantic zoom as well.

This has caused me to wonder whether part of the reason for the small number of excellent Windows Store apps is the difficulty developers have in getting them to work right. If so, that is a sad state of affairs for Microsoft’s shiny new platform.

In fairness, this is version 1.0, and the best hope is that a significant update to the platform will come before too long with improved controls, performance and features.