This is a book which ends too soon; but it is a good read nevertheless.

Journalist Matt Nicholson here provides a history of personal desktop computing, beginning with machines like the DEC PDP-8 in 1965, which was not a desktop computer but merely the size of a refrigerator so more convenient than a mainframe, and the Canon Pocketronic in 1970 which was an early pocket calculator. The key enabler was the invention of the integrated circuit, which packs thousands (and today, sometimes billions) of semiconductors into a single package. 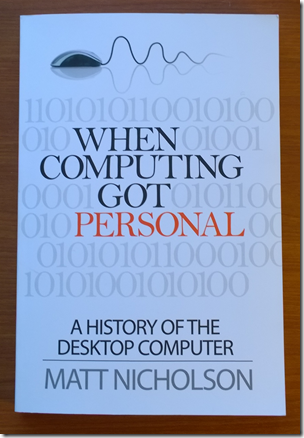 Early chapters follow the history of the MITS Altair, IBM’s first portable computers, Apple, Commodore, Atari, Intel and Microsoft. The reasons why IBM adopted Microsoft’s MS-DOS rather than CP/M from Digital Research are explained in detail; it was not merely because Digital’s CEO Gary Kildall was out flying when IBM called. Nicholson goes on to describe the battle of the WIMPs, graphical user interfaces from Apple, Digital Research and Microsoft, the triumph of Windows and the near-death of Apple before the return of Steve Jobs in 1997. The closing chapters look at the history of the Internet and the world wide web, and the rise of open source software and how Microsoft fought it.

I have read numerous books on the history of personal computing and rate this one highly. The research is excellent, backed by a 20 page bibliography. Nicholson also shows his editorial expertise by keeping the writing brisk and compact; the book is only 300 pages long.

That said, the book is stronger on the early years than it is on later developments. The bulk of the material relates to the years up to around 2004, a decade ago. Google hardly gets a mention, and the mobile revolution kicked off by Apple’s iPhone in 2007 has only a couple of paragraphs.

The reason I presume is that Nicholson aims to cover only desktop computers; yet the title of the book refers to personal computing, and a tablet with a Bluetooth keyboard being used for productivity (I am typing this review on one now) is part of the same story.

Nicolson describes how Microsoft turned on a pin in 1992, when Bill Gates authored his Internet Tidal Wave internal memo that marked the beginning of the company’s conversion to the web and its success with Internet Explorer.

It seems to me that this is a parallel with the announcement of Windows 8 in 2011 and Microsoft’s adoption of a touch user interface, though the outcome so far has been less successful; and that the extraordinary rise of Google Android is far enough along that it deserves more than the single mention it gets in this book. Google’s Chrome OS and Chromebook, which is hybrid desktop and internet technology, is another important development.

I would have liked Nicholson to write more about the last ten years then; but that does not take away from the high quality of what is covered here; recommended if you would like to understand how personal computing began.