Adobe’s Creative Cloud has been updated with a 2015 “Milestone” release. Creative Cloud is an apps by subscription service in which the apps can be updated at any time, but the company still pushes out update waves which are near equivalents to the old product launches. 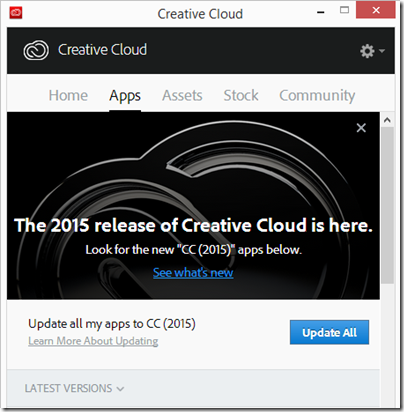 The big news this time is the introduction of a new product/service. Called Adobe Stock, it is based on the company’s acquisition of the Fotolia stock image company in January 2015. You can search and license images from a library of 40 million, paying £5.99 for a single image or buying a subscription. 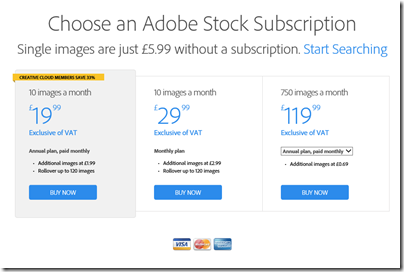 The puzzle here is that the image library is essentially the same as that of Fotolia, and the prices still available via the Fotolia site are different and can be cheaper, though direct comparisons are difficult since Fotolia has a more complex pricing system based on credits (one credit is from £0.43 to £0.82 and buys a single small image license) and license types, whereas Adobe Stock seems to be “one size fits all”. I asked Adobe exactly what rights you get when you purchase an Adobe Stock image license but have not got the answer yet.

Still, the costs are pretty low for most businesses and Adobe’s advantage is integration with its design tools like InDesign, Photoshop and Dreamweaver. It could be useful for images for this site, for example, though my search for “Windows 10” images did not quite hit the mark: 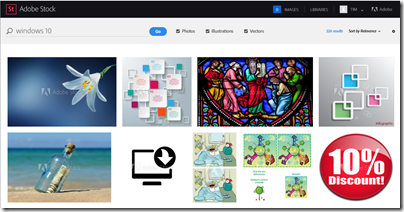 What else is new? A huge amount: this is a suite of large applications and each application has updates ranging from minor to highly significant. Based on a quick preview, here are some of the highlights:

Premiere Pro, the video editing application, has an amazing feature called Time Tuner which changes the length of a video. For example, you have a 30 minute video but need to cut it by 3 minutes to make room for an ad break. Time Tuner will automatically remove frames “at scene changes, during quiet audio passages, and in sections with still images or low visual activity.” Results will vary according to the content, but could save hours of meticulous editing.

A related feature is Morph Cut which helps you to edit interviews. If you cut out things like ums, ahs and hesitations in an audio recording, no problem, but with video you will get jumpy results thanks to head movements. Morph Cut smooths these out automatically.

Another magical video features shows up in After Effects. Face Tracker lets you apply effects to a face and have it applied automatically – this may not sound like much, but if you imagine the task of say blurring faces in a video in order to prevent recognition, you can see that this can save a lot of work. More mischievous examples would include adding spectacles, hats, hair or other embellishments.

The quick summary here is that “photoshopping” is easier than ever now for videos as well as photographs. You cannot trust what you see on the screen.

Dreamweaver, the web design tool, has built-in Bootstrap integration, Bootstrap being an open source JavaScript library developed by Twitter for responsive, mobile-friendly web designs. It is also used by Microsoft for the ASP.NET MVC templates in Visual Studio.

The Mercury engine, which accelerates image processing by using GPU cores for parallel processing (among other techniques) has been improved and applied to more products. Adobe claims that Illustrator is now 10 times faster and more precise than previous versions for zoom, pan and scroll (though some comparisons are with CS6, the last version before Creative Cloud). InDesign now uses Mercury for zooming and scrolling, which is twice as fast.

InDesign is also getting a new online publishing feature, though this is in preview. You can publish documents to Adobe’s hosted service. A way of publishing content without the hassle of hosting is always welcome, but raises old issues like the quality of the markup after conversion from InDesign (which is primarily for print), how you monetize the content with things like online ads, and exactly what role Adobe sees for the service versus other ways of getting content online. I will be looking for more information on this.

Update: I gave the online publishing feature a try and you can see the results here. I noticed that the HTML source is mostly SVG (a web language for vector graphics), and that the images are blurry though there is no doubt a fix for this.

Lightroom and Photoshop now have a Dehaze feature, for removing fog and haze in photos, or alternatively adding it. This looked amazing in the preview we saw. Here is a before and after: 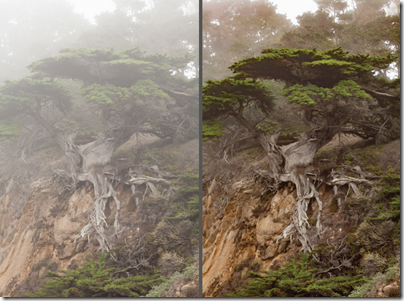 Android is getting some Adobe love, with the release of Brush CC, Shape CC, Color CC and Photoshop Mix, previously only available on iOS. There is still a clear preference for iOS though (presumably reflecting the preferences of the customer base), and a new Adobe Hue CC app for capturing colour schemes for Premiere Pro or After Effects is iPhone only.

There is plenty more of course; Adobe has a ton of information here.