Embarcadero has published a new roadmap explaining what to expect in forthcoming editions of its RAD Studio suite, including Delphi and C++ Builder.

The company has been acquired by IDERA though the Embarcadero brand is to continue under the new ownership.

The roadmap covers two “development tracks”, though it is not completely clear what that means. One is described as the “Spring development track” which suggests a release in April, 12 months after RAD Studio XE8. However, the post adds that “The team is working the following features that will be included in 2016 releases,” raising the possibility that some features in this track may come later, perhaps in the scheduled summer update.

The Spring track, to be called “Berlin”, seems to be mainly a tidying-up exercise in any case, with features including Bluetooth LE support for Windows 10, DirectX 12 support, native support for Utf8String on all platforms (you mean it does not have this already?) and enhancements to the FireMonkey cross-platform framework.

The second development track “will deliver a Fall release”, to be known as “Tokyo”, following the pattern of recent years where RAD Studio has two major updates every year. The Fall track is more interesting, and includes support for Delphi and C++ Builder on Linux Server, as well as “Linux platform support for console apps with IoT support.” I guess non-GUI Linux is the common thread here.

The IDE will remain on Windows, with cross-compilation for Linux. Initially supported distributions are Ubuntu Server and RedHat Enterprise, though further distributions will be added “as demand dictates”.

It is good to see Linux support back in Delphi. I remember Borland Kylix (2001-2003) well, but this was back in the days when desktop Linux looked like more of a thing.

The feature-list for Tokyo also includes Windows Centennial support. This is potentially big news. Centennial is a Microsoft project to deliver Windows desktop applications through the Windows Store, using application virtualisation based on the existing App-V technology to remove dependency issues. You can expect to hear more about Centennial at Microsoft’s Build conference at the end of March; it was covered at last year’s Build but we have not heard much more about it since. 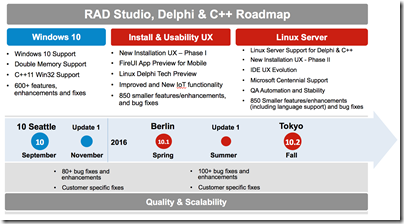 Embarcadero is also promising a new installer for RAD Studio, based on its GetIt technology, which will reduce installation time and give more flexibility in selecting features. This would be welcome; I never look forward to installing RAD Studio as it tends to be a time-consuming process. It would also be good if it messed less with system environmental variables, though I do not know if this is on the cards. The new installer will comes in two phases, phase 1 in Berlin and phase 2 in Tokyo.

My own view is that two major releases a year is one too many, so I would prefer if Embarcadero scrapped Berlin and went straight to Tokyo.