Microsoft is restoring a much-requested feature to its OneDrive cloud storage: placeholders, or what is now called Files on Demand.

The issue is that when users have files in cloud storage, they want easy access to them at any time, but downloading everything to local storage may use too much disk space. There are also scenarios where you do not want a local copy, for example for confidential documents, especially if you do not enable Bitlocker encryption.

You can use OneDrive through the web browser, but Windows users expect File Explorer integration, the most natural way of working.

Windows 8.1 introduced placeholders, where OneDrive (then SkyDrive) files appeared in File Explorer but were not actually downloaded until you opened them. It was a popular feature, but Microsoft removed it in Windows 10, saying that users found it confusing. I suppose they might have thought a file was on their PC, boarded a plane, and then discovered they could not work on the document because they it was not actually there.

This was a user interface issue, but apparently there were other technical issues, particularly for applications using the Windows file APIs. Perhaps the problems were so intricate that the team did not think it could be fixed in the first releases of Windows 10.

Now the feature is back, and I have installed it on the latest Windows Insider build: 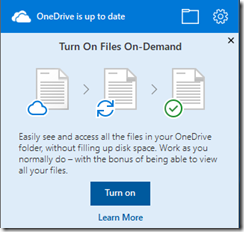 But could users still be confused? Files in OneDrive now have four possible states:

Hidden. You can still choose not to make all folders visible in File Explorer. In fact, hidden seems to be the default for folders previously not synced to the PC, though you can easily check an option to show them all: 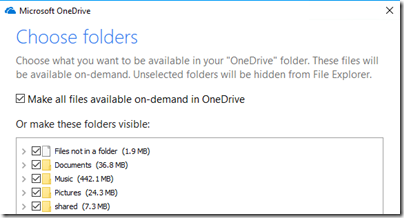 Online-only: Files have a cloud icon and are offline until you open them:

If you right-click a file in OneDrive you can change its status or share a link. If you want to make a file online-only, you choose Free up space (I think it would be clearer if this option were called Online-only, but this is a preview so it might change).

How do online-only files look to applications? I ran up Visual Studio and wrote a utility that iterates through a folder and shows the file name and length: 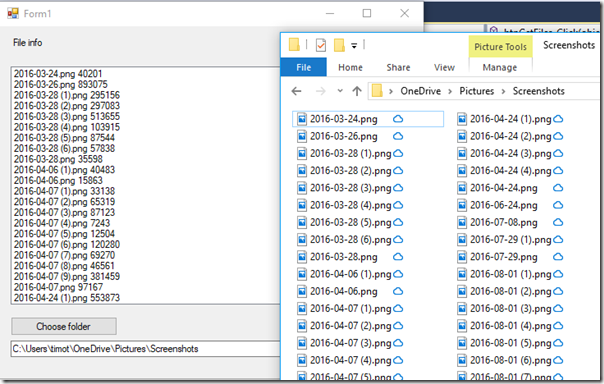 You will note that the API reported the size of the file online, not on disk. This is the kind of thing that can cause issues, though if the file size were reported as zero bytes – well, that could cause issues too.

Incidentally, you can also now sort files in File Explorer by Status. I imagine the latest Windows 10 SDK will also have a way to report status so that applications can catch up.